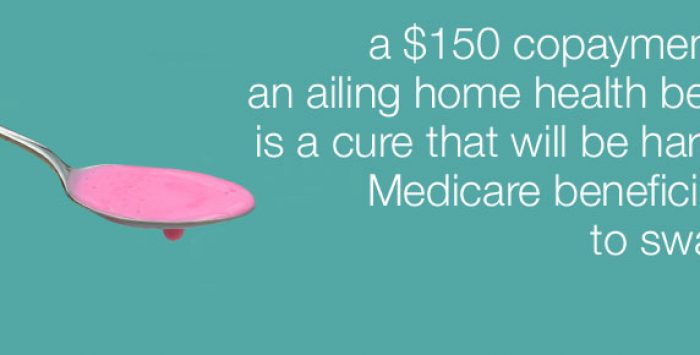 Associations are already howling about the Medicare Payment Advisory Commission’s recommendation that copayments are needed to discourage seniors from overusing Medicare’s home health visit benefit. And they’re right to howl.

Yesterday (January 13, 2011), the Congressional panel voted to recommend a copayment on home health visits, used by more than 3 million seniors and disabled people on Medicare. In its decision, the panel cited rapidly increasing costs, “big differences in how communities around the country use the benefit,” and “rampant fraud.”

It’s hard to argue that any of those issues shouldn’t be addressed in a fix to the benefit. A $20 billion tab run up for the benefits is certainly concerning.

But dissuading beneficiaries from using the benefit seems to us like punishing the victim. A $150 copayment adds insult to injury for folks who already have accepted Medicare’s limits on in-home health visits.

And the commission seems to acknowledge as much.

Several commissioners said they worried about the impact of a new charge on seniors with modest incomes. Numerous studies have shown that even small copayments can discourage patients from getting medical services.

As much as we always support cost savings, anti-fraud efforts and improvements in Medicare benefit delivery, we think this proposed remedy is going to do anything except make the intended patients feel better.

[2015 Update:  The home health copay has not yet been implemented, but it’s been proposed repeatedly in each successive year’s budget.  The 2016 proposed budget calls for a $100 home health copay starting in 2019, for new Medicare enrollees – those who become eligible for Medicare in 2019 or beyond.  The copay would apply to beneficiaries who have five or more home health visits that are not preceded by a hospital stay.  The proposal is expected to save Medicare $830 million over ten years, but it continues to be opposed by patient advocacy groups.]