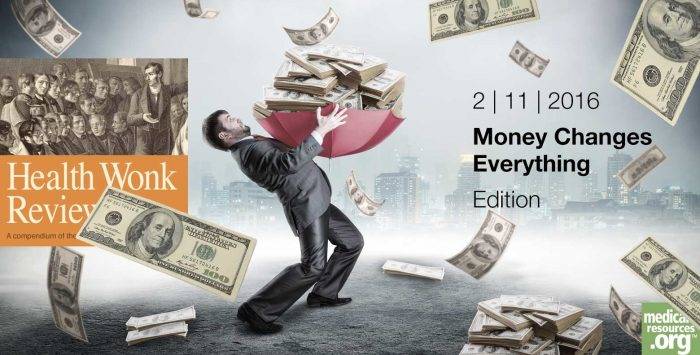 Sorry, but I just couldn’t bring myself to schlepping out yet another Valentine’s Day edition of Health Wonk Review. And though there was some inspiration for a Super Bowl-themed edition (read on), that too, seemed just a little too easy.
But it seemed pretty obvious that most of our Health Wonk Review contributors this week were seeing dollar signs and thus, my theme. (Yes, money is probably a fitting theme for most editions, but hey, let’s go with it anyway.)

The rich execs get richer

We might as well start off with Roy Poses over at Health Care Renewal, who’s seeing red over the abundance of greenbacks going to executives at Carolinas Healthcare. In The Rich (Hospital Managers) Get Richer – Carolinas Healthcare Raises Executive Compensation Once Again, Poses wasn’t mincing words about the fact that the rich at CH just continue to get richer:

Every year it is justified by the same tired talking points: executive pay is dictated by a “free market,” health care management is a particularly difficult job, much more difficult than taking care of patients, and health care managers are brilliant. And every year there are examples that these particular managers are not so brilliant. Where are the echoes, and where is the outrage? As long as top health care leaders can pay themselves so splendidly and with so little accountability, health care dysfunction will continue.

Money down the Super Drain?

Joe Paduda vented about wild sums of money this week, too, in The Super Bowl of Drugs (that Super Bowl tie-in I mentioned). Paduda tuned into Super Bowl 50 only to be turned off by a bunch of high-dollar commercials about pharmaceuticals.
“If you weren’t nauseated by the animated digestive tracts and frequent allusions to digestive disorders, the market forces allowing pharma to spend $10 million on an ad for toenail fungus should make you ill indeed,” Joe commented.

And speaking of money – and lots of it – Charles Gaba took a look at Bernie Sanders’ $1.4 trillion (he predicts) Single Payer plan in How close can we get to zero percent uninsured?
Gaba’s question: Do we really need to spend that kind of money to move the U.S. nearer to universal coverage? (Check out the post if you’re interested in Gaba’s point-by-point plan for moving the needle.)

We’ve got two great posts on the topic of employee compensation this week:

“These studies provide useful new information, but they do not mean, as some reporting on them seems to suggest, that there is nothing to worry about with respect to the ACA’s effects on labor markets. Given the structure of the ACA, it would be hard to conclude the law would not eventually reduce hours worked or total compensation, although the magnitude of the resulting changes may be hard to detect in the U.S.’s large and complex labor markets.”

Based on the existing body of evidence, the authors note that “the ACA has increased health insurance coverage for many millions of Americans with no reduction in overall employment; the ACA’s Medicaid expansions have had no discernable adverse effects on employment patterns; and more study is needed on the effects of the ACA on part-time work, but the current weight of the evidence leans towards small effects so far.

At Population Health Blog, Jaan Sidorov looks at patient-centered medical homes (PCMH) in his post, An Update on the Evidence of the Impact of the Patient Centered Medical Home on Cost and Quality: Of Soup and Weather Vanes. In the post, Sidorov reviews the latest findings on the impact of a reorganized version of primary care dubbed the “medical home.”
According to the medical home’s trade association, the latest science on the topic shows evidence of savings, lower utilization and increased quality. According to Sidorov, the findings vary considerably, but that doesn’t bother him. He says the organization of the medical home is “more like a adaptable ‘soup’ recipe and that the evidence has more to do with the directionality of a weather vane than any scientific precision.'”

Sadly, not all of this week’s posts fit my theme. Here’s were we missed:

Special recognition to Henry Stern for this week’s chuckle: In Finally! Free male cancer screening, Stern notes that “prostate cancer screening’s important, but the ACA doesn’t consider it preventive care.” Luckily, as InsureBlog reports, some other federal agency does. There’s a twist, though … and you’ll have to read it for yourself.

That’s it for this week’s edition of Health Wonk Review. Tune in next time – on February 25 – as Louise Norris hosts HWR over at Colorado Health Insurance Insider.