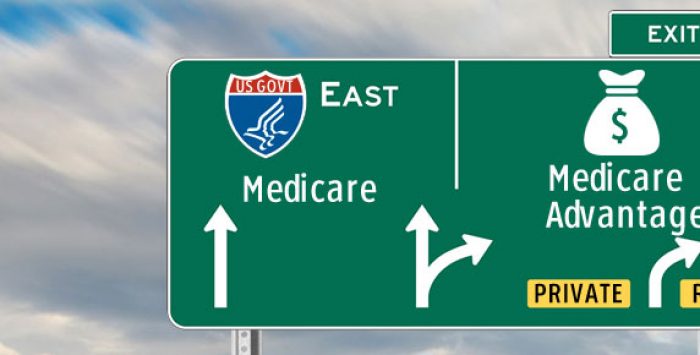 What is Medicare Advantage?

Advantage plans tend to constrain beneficiaries to a limited provider network, and coverage for specific services may not be as robust as it would be with Original Medicare plus supplemental (Medigap and stand-alone Part D) coverage. But Advantage plans, including the cost for Medicare Part B, also tend to be less expensive than Original Medicare plus a Medigap plan plus a Part D plan. This article helps to illustrate the pros and cons of each option.

How many Americans have Medicare Advantage coverage?

As of April 2022, there were more than 29 million Americans enrolled in Medicare Advantage plans — nearly 46% of all Medicare beneficiaries.

Enrollment in Medicare Advantage has been steadily growing since 2004, when only about 13% of Medicare beneficiaries were enrolled in Advantage plans. Managed care programs administered by private health insurers have been available to Medicare beneficiaries since the 1970s, but these programs have grown significantly since the Balanced Budget Act – signed into law by President Bill Clinton in 1997 – created the Medicare+Choice program.

What are the benefits of Medicare Advantage?

Advantage plans also cover urgent and emergency care services, and in many cases, the private plans include Part D prescription drug benefits, and also cover vision, hearing, health and wellness programs, dental care, and various other supplemental benefits. Since 2019, Medicare Advantage plans have been allowed to cover a broader range of extra benefits, including things like home health aides, medical transportation, and the installation of in-home safety devices. Some plans have chosen to offer these benefits, although they are still not particularly widespread as of 2022.

Some Medicare Advantage plans also offer “giveback” rebates, which reduce the amount that’s deducted from the beneficiary’s Social Security check to cover the cost of Medicare Part B (Medicare Advantage enrollees still have to pay for Part B, so even if the Advantage plan has a $0 premium, the person has to pay the federal government for Part B; the giveback rebate offsets some of this cost).

Plans that have giveback benefits, also known as premium reduction plans, are not available in all areas, although they are available in the majority of US counties (most Advantage plans do not include rebates for Part B premiums, but most areas do have at least one plan that does).

Where these plans are available, it’s common to see them reduce a person’s Part B Social Security premium deduction by $30 to $70 per month, although the premium rebates range from as little as ten cents per month to as much as the full cost of the Part B premium.

How many types of Medicare Advantage plans are there?

Insurance companies offer six different approaches to Medicare Advantage plans, although not all of them are available in all areas: an HMO (health maintenance organization), a PPO (preferred provider organization), an HMOPOS (HMO Point of Service), a PFFS (Private Fee-For-Service), an MSA (medical savings account), or an SNP (special needs plan).

You need to choose your own primary care doctor with an SNP, HMO, or HMOPOS, but not with an MSA, a PPO, or a PFFS. HMOs and SNPs are the only plans that require a referral prior to seeing a specialist, and the HMO plan is the only plan in which you must only receive care from doctors in that network.

How much do Medicare Advantage plans cost?

Even though Advantage enrollees have rights and protections under Medicare guidelines, the services offered and the fees charged by private insurers vary widely. A thorough understanding of how these plans work is key to the successful management of your personal health.

Advantage plans can charge monthly premiums in addition to the Part B premium, although 59% of 2022 Medicare Advantage plans with integrated Part D coverage are “zero premium” plans. This means that beneficiaries only pay the Part B premium (and potentially less than the standard amount, if they select a plan with the giveback rebate benefit described above).

But across all Medicare Advantage plans, the average premium is about $19/month for 2022. This average includes zero-premium plans and Medicare Advantage plans that don’t include Part D coverage — if we only look at plans that do have premiums and that do include Part D coverage, the average premium is higher.

Some Advantage plans have deductibles, others do not. But all Medicare Advantage plans must currently limit in-network maximum out-of-pocket (not counting prescriptions) to no more than $7,550. The out-of-pocket maximum had previously been $6,700 each year from 2011 through 2020, but it increased as of 2021, under new methodology that was finalized in 2018. CMS will continue to gradually change it over time, although it’s still $7,550 for 2022. (Beneficiaries should keep in mind that the out-of-pocket cap only applies to services that would otherwise be covered by Medicare Parts A and B — even though most Advantage plans include Part D coverage, drug costs are not capped and are not included in the maximum out-of-pocket limits.)

But many plans have out-of-pocket limits below this threshold, so it’s important to consider the maximum out-of-pocket when comparing policies. The average out-of-pocket cap in 2021 was approximately $5,091 for in-network services — well below the maximum amount required under federal regulations.

Copayments for doctor’s visits differ dramatically, as do the actual health care services and how often enrollees receive those services. Close attention to the details is necessary when assessing these plans.

Medicare Advantage plans must have MLRs of at least 85%, which is the same as the requirement for plans issued to employers in the large group market. That means 85% of their revenue must be used for patient care and quality improvements, and their administrative costs, including profits and salaries, can’t exceed 15% of their revenue (revenue for Medicare Advantage plans comes from the federal government and from enrollee premiums). The specifics of the calculations are laid out in this HHS regulation from 2013, with the calculation details starting on page 31288.

In the individual, small-group, and large-group health insurance markets, insurers that fail to meet the MLR requirements must send rebates to policyholders (individuals or employers). But for Medicare Advantage plans, the rebates must be sent to the Centers for Medicare and Medicaid Services (CMS) instead.

The federal government has ordered several plans to suspend enrollment in 2022 coverage due to a failure to meet the MRL requirements.

Who is eligible to join Advantage plans?

Individuals with End-Stage Renal Disease (ESRD) were generally not eligible to enroll in Advantage plans prior to 2021 — with the exception of Medicare Advantage ESRD Special Needs Plans, although these are not widely available. But this changed as of the 2021 plans year, as a result of the 21st Century Cures Act. Medicare Advantage plans are now guaranteed issue for all Medicare beneficiaries, including those with ESRD.

You should know that if you enroll in a Medicare Advantage Plan, you will not need to purchase Medigap coverage, nor will you be able to buy it. If you already have Medigap coverage, you can keep the coverage (which could be useful if you eventually want to switch back to Original Medicare after your 12-month trial right period has ended), although it won’t pay for Medicare Advantage out-of-pocket expenses, such as copayments and deductibles.

What if you want to leave Medicare Advantage and switch to Original Medicare?

If you change your mind and want to switch back to Original Medicare in the future, you’ll be able to do so during the annual open enrollment period (October 15 to December 7) or the annual Medicare Advantage open enrollment period (January 1 to March 31) You’ll have an opportunity to also enroll in a Medicare D plan at that point, regardless of how long you’ve been enrolled in Medicare Advantage.

For a person who has been enrolled in Medicare Advantage for more than a year and wants to switch to Original Medicare, the lack of guaranteed-issue access to Medigap plans can be a significant obstacle. Original Medicare provides much more extensive access to medical providers nationwide, and when combined with a Medigap plan, it can also offer lower out-of-pocket costs than Medicare Advantage plans (albeit with potentially higher total monthly premiums, so there is a trade-off there). But if a person is unable to enroll in a Medigap plan, the unlimited 20% coinsurance for Medicare Part B can result in unaffordable out-of-pocket costs if extensive and ongoing medical care is necessary.

The Patient Protection and Affordable Care Act has restructured payments to Medicare Advantage plans in an effort to reduce budget spending on Medicare, but for the last few years, the payment changes have either been delayed or offset by payment increases. When the law was first passed, many people – including the CBO – projected that Medicare Advantage enrollment would drop considerably over the coming years as payment reductions forced plans to offer fewer benefits, higher out-of-pocket costs, and narrower networks.

But that has not been the case at all. Medicare Advantage enrollment continues to grow each year. There were more than 29 million Advantage enrollees in 2022, which accounts for nearly 46% of all Medicare beneficiaries. That’s up from just 13% in 2004, and 24% in 2010, the year the ACA was enacted.

The number of Medicare Advantage plans available has increased for 2022 to the highest in the last decade, with a total of 3,834 plans available nationwide. The majority of beneficiaries still have at least one zero-premium plan available to them, and the average enrollee can select from among 39 plans in 2022.

How does the Affordable Care Act affect Medicare overall?