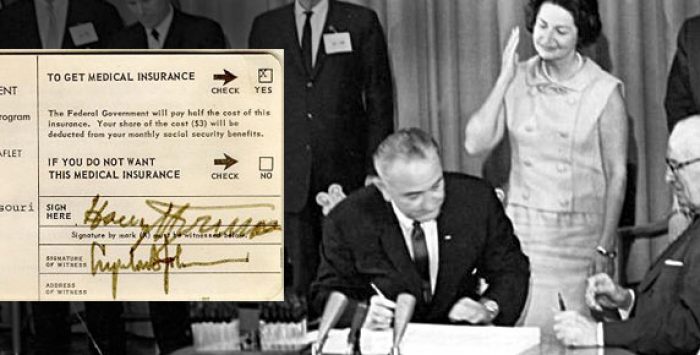 On November 19, 1945, seven months into his presidency, Truman sent a message to Congress, calling for the creation of a national health insurance fund, open to all Americans. The plan Truman envisioned would provide health coverage to individuals, paying for such typical expenses as doctor visits, hospital visits, laboratory services, dental care and nursing services.

Although Truman fought to get a bill passed during his term, he was unsuccessful and it was another 20 years before some form of national health insurance – Medicare for Americans 65 and older, rather than earlier proposals to cover qualifying Americans of all ages – would become a reality.

President John F. Kennedy made his own unsuccessful push for a national health care program for seniors after a national study showed that 56% of Americans over the age of 65 were not covered by health insurance. But it wasn’t until after 1966 – after legislation was signed by President Lyndon B Johnson in 1965 – that Americans started receiving Medicare health coverage when Medicare’s hospital and medical insurance benefits first took effect. Harry Truman and his wife, Bess, were the first two Medicare beneficiaries.

By April 2022, there were nearly 64.5 million people receiving health coverage through Medicare. Medicare spending reached $830 billion in 2020, accounting for about 20% of total national health spending that year.

Medicare spending projections fluctuate with time, but as of 2021, the Medicare Part A trust fund was expected to be depleted by 2026. By 2022, however, the trust fund depletion date had been pushed out to 2028. (Medicare will continue to exist, but claims will have to be covered by payroll taxes, which won’t be sufficient to fully cover all Part A claims.)

A brief look at Medicare milestones