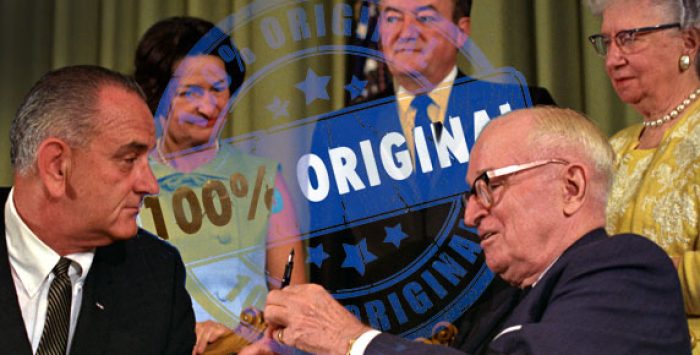 What is Original Medicare?

Original Medicare is just that: the components of the Medicare program signed into law by President Lyndon B. Johnson on July 30, 1965.
Sometimes called “Traditional Medicare,” Original Medicare is the fee-for-service program in which the government pays directly for the health care costs you incur. The coverage allows you to see a doctor anywhere in the country (as long as the doctor accepts Medicare).
When it became law, Medicare consisted of two parts – and they’re the same two parts providing coverage to millions of Americans nearly 55 years later:

Medicare Part A is called “hospital insurance” because it provides broad coverage of inpatient expenses, including not only hospital visits, but also care in skilled nursing facilities, hospice care, and home health services. The coverage is typically free if you or your spouse paid Medicare taxes during the years you worked.
How to enroll in Part A.

While Part A basically covers inpatient services, Medicare Part B is also referred to as “medical insurance” because it covers medically necessary services – including physician and nursing fees, x-rays, diagnostic tests, blood transfusions, chemotherapy, renal dialysis, and some vaccinations – and also preventive services.

Although most medically necessary services are covered by either Part A or Part B, most outpatient prescription drugs are not (Part D coverage is necessary for prescription benefits, unless a person has other creditable coverage). Dental care is also not covered under Original Medicare, and neither is routine vision care.
Enrollees pay a monthly Part B premium ($144.60/month for most enrollees in 2020).
How to enroll in Part B.

Unlike private health insurance plans, Original Medicare does not have a cap on out-of-pocket costs — coinsurance charges continue to add up for the duration of a beneficiary’s treatment. To cover out-of-pocket costs, most enrollees have supplemental coverage, either from an employer-sponsored plan, Medicaid, or a Medigap supplement.

Medicare Advantage is an alternative to Original Medicare