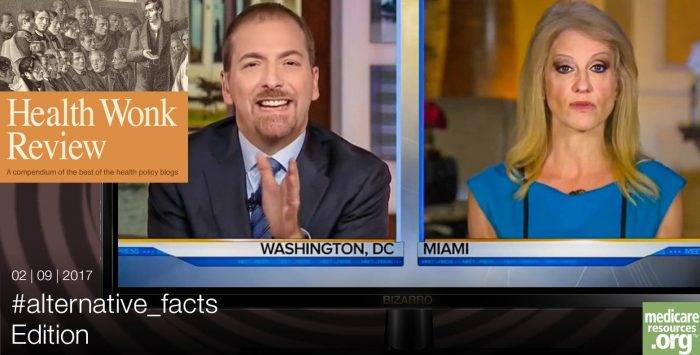 Honesty is such a lonely word. Everyone is so untrue.

The title of Billy Joel’s hit song wouldn’t have been nearly as appealing – and probably harder to pair with a melody if he had called it #Alternative_Facts.

But I do suspect Billy Joel was bumming about what many of us have been feeling these past few months: the conspicuous absence of that thing we love called truth. And when I looked through the blog submissions for this week’s edition of Health Wonk Review, it felt like there was a thread of that sentiment – and that I had a makings of a fun (depending on your perspective) theme.

The Affordable Care Act needs just a few nips and tucks to transform it into the health coverage plan that everyone will love? Patrick Paule, writing over at InsureBlog would say that’s clearly an #alternative_fact. In Obamacare Has Mold, Paule likens ObamaCare to a “moldy fixer-upper,” and suggests it’ll take much more than a make-over.”

In Health Care Professionals and Trainees Finally Provoked to Resist – Cleveland Clinic Protest of CEO’s Acquiescence to Trump’s Muslim Travel Ban, Poses reports that employees at the Cleveland Clinic recently rose up to challenge the behavior of the Clinic’s leadership – formally asserting that its CEO needs to put money ahead of patients. What could be inspiring them?

Wait. All of this focus on #alternative_facts might be motivating healthcare professionals to speak up for patients? Nice.

In the wake of President Trump’s immigration ban, we’ve read all manner of stories about the costs of the ban. In US Versus Foreign Trained Docs: Who Saves More Lives? Brad Flansbaum, riffs on a new study from BMJ that compared the quality of care delivered by general internists in U.S. hospitals who graduated from foreign versus U.S. medical schools. Flansbaum’s conclusion:

… the paper is ammunition against those who would be quick to dismiss talented folks coming from offshore and the exemplary service they bring to our health care system.

My read on the #alternative_fact here? That of course U.S.-trained doctors deliver higher-quality care? OR maybe it’s that an immigration ban really isn’t that disruptive. #talkamongstyourselves.

Jason Shafrin, over at Healthcare Economist, asks Which cancer treatment is best? Naturally, patients want the “best” treatment for their disease and cancer is no exception.

In his post, Shafrin asks the question of how we define “best”? (Might one’s assessment of the “best drug” be an #alternative_fact?) Jason investigates the question – and finds that even when measuring only drug efficacy, one’s definition of “best” will affect the drug a physician would recommend.

A post by David E. Williams over at Health Business Blog is titled, Due diligence in middle market healthcare M&A. The boutique consulting firm advantage.

In the post, David asks, Where does a private equity firm turn for help when evaluating a healthcare deal? His answer: Boutique consulting firms are often the best in the middle market.

Alternate title for this post? Can a boutique consulting firm steer you clear of #alternative_facts?

No? I’m just throwing it out there.

Not an alternative fact? Chuck Norris can kill two stones with one bird.

Since way back in December, Joe Paduda has been has been writing columns about the impending (or maybe not since it’s a Thursday in a month ending with R) repeal of the Affordable Care Act. They’re fun reads – and you should check them all out.

The point of Paduda’s columns? That repeal is inevitable IS an #alternate_fact. That’s right. Paduda says it’s “not gun happen.” And he says it again in this week’s post: ACA Deathwatch: Whoa, there, cowboy!

(Joe, are you pandering to those of us in Texas? or mocking us?)

Anyway, in his post, Joe goes into further detail about the problems the GOP is having trying to deliver on its “undeliverable-upon campaign promise to repeal and replace with something great.” And he gets bonus points for throwing in an image of Chuck Norris.

Whoo. These are getting tougher to sync up with my theme, but here goes:

David Harlow, over at HealthBlawg, has an interesting post about the yet-unresolved class action lawsuit against Horizon Blue Cross Blue Shield (NJ) which was brought against the company after the 2012 theft of two unencrypted laptops containing about 840,000 plan members. As Harlow reports in Stolen Laptops Class Action Gets New Legs, the class action lawsuit is moving forward.

The #alternative_fact here? That patients don’t have the right to sue an entity for damages as a result of a data breach under HIPAA.

Hope I got that right, David. If not, sue me. (But seriously, please don’t.)

Tom informs his readers that the work comp system has gotten pretty efficient at treating medical issues and getting the employee back to the job, but that psychosocial issues pose a unique set of challenges during the claim process. Tom outlines the details in this post,  and will address the topic in follow-on posts.

I’m going to punt this one and say that the #alternative_fact here is obviously that, psychosocial issues aren’t a “big, fat costly problem.”

Those of you who know Charles Gaba – high commander and keeper of all data related to Obamacare enrollment over at ACASignups.net – know that he’s got zero tolerance for #alternative_facts. He might as well just change the name of his site to unalternativefacts.net. (And I will sell you that domain for $15,000, Charles. Call me.)

Anyway, one of his latest posts is a look at the coverage Americans could lose under repeal of Obamacare. And as usual, he gets very specific. Very very specific to be specific.

How specific? He breaks down the numbers by Congressional district. (I was horrified to note that 25,064 people would lose coverage in my Texas district. Dang.)

The #alternative_fact here? Folks who gained coverage, thanks to Obamacare? They’ll be just fine.

Another #alternative_fact, apparently? That the return of lifetime coverage caps – thanks to Obamacare repeal – would not affect a whole bunch of people. Andrew Sprung debunks that one with his post at xpostfactoid:

If ACA is repealed, how many will max out on restored lifetime coverage caps? Sprung provides a whole bunch of statistics that should disturb folks not just on the individual market, but apparently about half of those with employer-sponsored coverage.

Louise Norris, one of the most prolific health policy writers I know, has a really great explainer over at verywell.com. In it, Louise looks past a widely hailed #alternative_fact – that President Trump’s Day One executive order dramatically affected the law “with the stroke of a pen.”

Not that simple, says Louise – who explains that changing the ACA literally requires an act of Congress but that Trump’s action out of the gate really is intended to hamper, bog down, obstruct, and sandbag the law.

I’d say that’s not really a new development, but that also might be deemed #alternative_fact. So don’t trust me. Read her excellent post.

Last, but not less alternative: 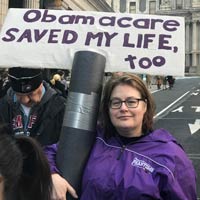 Wendell Potter, writing next door at healthinsurance.org, is also having a little trouble with a couple of Donald Trump’s promises about Obamacare, but in fairness (and also because, you know, 13) we’re giving Wendell just one alternative_fact: that “once it’s repealed everybody will be “beautifully covered.”

Yeah, no, Wendell says – illustrating his point with the story of Kristin Wolf, a fellow Pennsylvanian with life-threatening pre-existing conditions. Wolf is all too familiar with the “good old days” before Obamacare – which is why she was one of thousands who marched to plead their case to President Trump when he was in Philly in January. (Spoiler: Trump didn’t emerge from his hotel to give everyone a reassuring hug.)

So there you have it: irrefutable proof that 1. Health Wonk Review is home to some amazing wonks who are committed to cutting through the B.S. and dishing out some seriously fact-based analysis and 2. I can establish a theme and run with it to the bitter end.

Thanks for stopping by! Hope your week is NOT filled with #alternative_facts. Come on back for another dose on February 23 over at Health Business Blog.

[…] Anderson hosted this week’s “#Alternative_Facts” edition of the Health Wonk Review, at medicareresources.org. It’s an excellent edition, and each entry in framed in terms of an […]

0
Reply
Health Wonk Review is up at Medicare Resources – mildredjizquierdo

[…] guess it’s a sign of the times that the theme of the latest Health Wonk Review blog carnival is #alternative_facts. Our host, Steve Anderson presents each submission straight but then sniffs […]