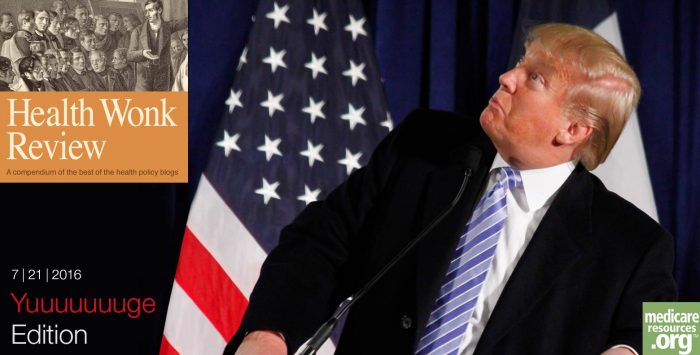 I’ve resigned myself to the fact that there’s pretty much no escaping the pageantry and awe of this week’s Republican Convention. And – since it’s on every network and every blog, I figure, why not right here in Health Wonk Review? Why not a Yuuuuuuuge Edition?

Well, I can tell you, this Health Wonk Review really is a luxurious collection of health blogging from some unbelievable contributors. (And I’ll say this: They love me.)

Let’s start by building a big, beautiful, powerful wall around some great health reform-related posts:
Over at InsureBlog, Henry Stern offers up ObamaTax subsidy news, Stern’s take on newly proposed IRS regulations regarding the Affordable Care Act’s premium tax credits. I think it’s safe to say – if not from his conclusion alone – that Henry wouldn’t call the new regs tremendous.

How are they going to enforce this? It’s almost as if they have no idea what they’re doing.

Louise Norris has a classy explainer on Congressional legislation in HR 5447 – Should employers be allowed to reimburse individual health insurance premiums? The legislation – which passed the House and is with the Senate now – would allow employers to contribute to their employees’ individual health insurance premiums, up to a maximum of $5,130 for a single employee, or $10,260 if the reimbursement also includes an employee’s family members.

Obamacare. Replace it with something really terrific?

And speaking of Obamacare alternatives, Health System Ed’s Peggy Salvatore sent us The Public Option or (ahem) Single-Payer: Solutions to a Growing Healthcare Monster. Could Single Payer be the political solution “to a growing monstrosity of a problem high on the agenda of both parties”? She writes:

At some point, the focus needs to return to a simple transaction between a patient and a healthcare provider where the only issue on the table is the patient’s health. Perhaps the only way to make that happen is to remove business from the business of healthcare and provide a universal option.

What’s ailing the U.S. healthcare system? In Dialysis and its discontents, Health Business Blog’s David Williams says we need to look no further than the dialysis industry, a convoluted and problematic corner of the industry. There is plenty of blame to go around.

Achieving the Triple Aim of improving the health of America’s dual population while lowering the cost of doing so is a rabbit-out-of-the-hat trick of the first order, but, at least to this point, Commonwealth Care Alliance seems to be onto something that will do just that.

Or another way of putting it, I guess, would be to say they’re not fired.

Joe Paduda at Managed Care Matters was all about the opioids this week, with a two-parter. In  You broke it, you own it, Paduda dives into physician and pharmacist reluctance to support prescription monitoring programs. (Paduda notes that if not for the docs writing scripts, we wouldn’t be in an opioid crisis today.)

Then, in Purdue Knew, Paduda highlights key sections from an LA Times article detailing what Purdue pharma knew about rampant overprescribing of Oxycontin, and when they knew it, and what they did about it. “Which would be, in a word, nothing,” Paduda notes.

Since we’re on the topic of prescriptions, Jason Shafrin, asks, Will value-based pricing be coming to the U.S.? Shafrin notes that value-based pricing increases the price for drugs shown to be effective in the real-world and decreases the price for those that do not. Are the legal barriers to this form of reimbursement falling by the wayside?  The Healthcare Economist investigates.

How about one more post on the topic of pharmaceuticals? Roy Poses at Health Care Renewal sends us Abort, Retry, Fail – Billionaire Bill Gates Opines, Sans Evidence, on … the Efficacy of Hepatitis C Treatment? In the post, Poses looks at the actions of major foundations – like those led by “the Bills” (Clinton and Gates) – “which have the potential to make real improvements in U.S. and global health care … but instead … seem to be functioning like marketing and public relations auxiliaries of big health care corporations.”

The big – make that yuuuuuuug – picture

We’ve got two great posts this week looking at the future of our healthcare system.

David Cutler, writing at Health Affairs Blog, takes a look at the big – make that yuuuuuuuge – picture in Health Expenditure Projections: When Does ‘New’ Become ‘Normal’? Cutler looks at new CMS projections: 1. an average rate of national health spending growth of 5.8 percent from 2015 to 2025 and 2. that the health share of the economy will be 20.1 percent at the end of this period.

But “forecasting is an inexact science,” says Cutler, who offers four reasons to think that the Actuaries may have overstated the path of medical spending.

At The Hospital Leader, Brad Flansbaum posted The Next Hospital Decade: Broken Hips Versus Band-Aid Strips. His post is chock full of “choice charts” from MedPAC – and, Flansbaum notes: “It won’t take long to figure out the theme. A clue:”

– 2016: Go to your local hospital and get your hip replaced; we can check up on that sore throat and lower back of yours as well.

– 2026: Go to your local hospital to get that throat and back examined; let’s check up on that sore hip while you are here.

No. I’m not talking about the last post in this week’s review … but what about the folks behind ransomware attacks? Clearly disgusting, right?

But HealthBlawg’s David Harlow tackles a more important question in Is a Ransomware Attack a Data Breach? Maybe. Harlow notes that the federal government recently issued guidance essentially saying that any ransomware attack – “malicious cyber-attacks on electronic health information systems” – should be reported as a data breach. Harlow takes a look HHS’s rationale and he’s skeptical.

“While they certainly have the discretion to do so, it seems that this is pushing things a bit too far. What do you think?”

Well, that’s it for this week’s edition of Health Wonk Review. Enjoy your convention coverage now and then tune in for the next edition of HWR on August 18 – as Jason Shafrin hosts HWR at the Healthcare Economist.