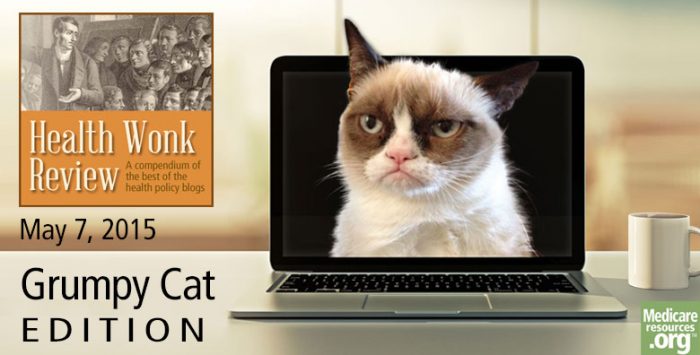 Ok. Let’s get straight to the answer to your burning question: “Grumpy Cat Edition?”

The answer is yes, I could have gone for the “Mother’s Day Edition” or “Mother of All Health Wonk Reviews Edition” or something motherly. Boooorrrriinnng.

Instead, as I read through this week’s submissions, it just seemed obvious that most of our writers were tapping into a general vibe of grumpiness out there in the health policy blogosphere. (And who better to illustrate that grumpiness than Grumpy Cat?)

Seems like so many folks just “can’t get no satisfaction” – from hospital mergers, from electronic health records, from … well … Florida. (I know you’re thinking, “Why not an ‘I Can’t Get No Satisfaction Edition’ … complete with a prancing Mick Jagger?” Maybe next edition.)

Anyway … on to this week’s Grumpy Cat-egories:

(Yes, Grumpy Cat could do an entire series dedicated to the Affordable Care Act.)

Patrick Paule – writing for Insureblog – may not be personally grumpy about Obamacare (or he may be) but he predicts that about 56 percent of the American population will be quite grumpy with its provisions a few years down the line. Sure, it’s polling well now, Paule says, but that’s just because “Obamacare is front loaded with warm and fuzzy feel good benefits.”

Those electronic health record systems that everyone’s so jazzed about? They could turn your frown that was upside down back the way it was, says Peggy Salvatore. In Health Information Technology Ain’t What It Used To Be, Salvatore says she’s “truly concerned that we are spending money building a system that is outdated before it’s installed.” [Wince.]

In Iowa and Medicaid Managed Care: Proposed Changes for 2016, – Matthew Nattinger’s post at Wright on Health – Nattinger notes that Iowa recently announced intentions to move all Medicaid enrollees into managed care starting in 2016. He looks at the rationale for “modernizing” Medicaid and takes a look at what could go right, but also “what could go really, really wrong” for Medicaid beneficiaries. [Insert frown here.]

Over at Managed Care Matters, Joe Paduda is brimming with grumpiness over Florida’s conundrum, in which Governor Rick Scott and his legislature don’t want to expand Medicaid but do want a billion dollars in federal money that’s about to disappear. Joe illustrates the column’s point with the help of a pet water moccasin (and really, isn’t that snake sort of the epitome of grumpiness?)

Wait. Don’t smile just yet. David Williams, writing at Health Business Blog, wrote about a new kind of “death panel” in which federal laws allow Medicaid to recover costs from beneficiaries’ heirs. It’s a popular idea, Williams says, “but I think it’s a bad one.” (We sensed as much from your creepy skeleton illustration, David.)

Louise Norris (who has not ever been spotted being grumpy) at Colorado Health Insurance Insider has her own Medicaid column: A dependent child’s income and MAGI for Medicaid/subsidy eligibility. The column’s noble goal: to make a dent in the frustration of folks trying to figure out how to calculate MAGI when determining eligibility for Medicaid or marketplace subsidy.

Bigger is not better

In this edition, we actually have posts from two writers who aren’t buying the “bigger is better” mantra:
Roy Poses, writing for Health Care Renewal, asks in More Barbarians at the Gates: Private Equity Puts Primary Care in Play what could possibly go wrong when primary care physician practices find themselves in the crosshairs of private-equity firms. At lot apparently. As Roy notes, “Primary care physicians thinking about selling their practices to private equity ought to think at least twice before doing so, assuming the physicians are serious about upholding the values of primary care.”

Over at The Hospital Leader, Brad Flansbaum registers his own concerns about the effects of hospital mergers. The title pretty much says it all: Be skeptical when your hospital expresses an urge to merge. But just to be clear, Brad advises, “the myth of bigger is better should not continue to thrive.”

Ok, it’s not all grumpy

At Workers Comp Insider, Julie Ferguson penned The next frontier in prevention: Mental Health. It’s a great piece that looks at the mental/emotional well being of workers. (A dramatic example of the effects of mental illness in the workplace: the horrific case of the suicidal Germanwings pilot who crashed the commercial jet he was flying.) Fortunately, Julie says, employers can play “a significant role in fostering workplace mental health.”

And last – but in no way least – is this site’s Louise Norris explainer, Is Original Medicare coverage enough? As Norris notes, if your income is high or very low – or you’re feeling lucky – you might be able to rely on Original Medicare coverage … but most people don’t. (Huh. I guess I could have lumped that into the “grumpy” cat-egory after all.)

One final note: As thrilled as I am about giving Grumpy Cat a little extra visibility, I’m also pretty excited to have the opportunity to introduce readers to our new-and-improved, recently relaunched medicareresources.org. Thank for stopping by! I hope you return often.

So ends another edition of Health Wonk Review. Tune in next time – May 21 – as Hank Stern hosts what hopefully will be a less grumpy edition of HWR over at InsureBlog.

Until then, keep on purring!