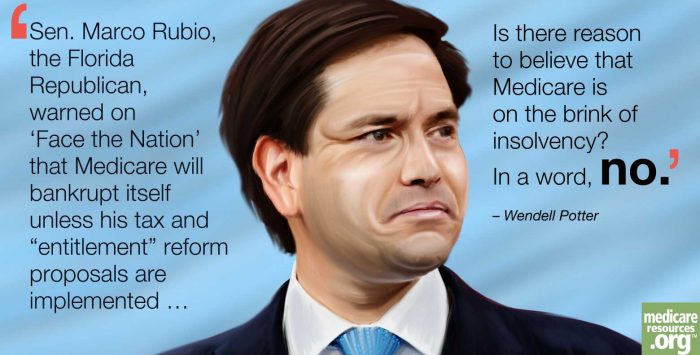 “Medicare is not going to be there when you retire.”

If you’re like me, you’ve heard these predictions from politicians for years. In my case, for decades. They seem to resurface every election cycle. As if right on cue, presidential candidates are once again foretelling Medicare’s imminent demise.

Just this past weekend, Sen. Marco Rubio, the Florida Republican, warned on “Face the Nation” that Medicare will bankrupt itself unless his tax and “entitlement” reform proposals are implemented. If truth be told, Medicare probably would indeed face bankruptcy should Rubio’s tax reform plan actually be implemented. Even the conservative Tax Foundation says Rubio’s plan would decrease government revenues by $6 trillion over 10 years.

Barring that, is there reason to believe that Medicare is on the brink of insolvency?

I first heard that Medicare was headed for bankruptcy when I was a young reporter covering Capitol Hill back in the mid-1970s. Although the program was barely 10 years old at the time, politicians were telling the nation that Medicare would run out of money in short order.

Why we keep hearing these predictions

The reason the predictions are a mainstay of American politics has to do with the fact that Medicare’s trustees have released reports on an annual basis projecting the Medicare Hospital Insurance (HI) Trust Fund’s insolvency date. According to the Congressional Research Service, since 1970 the trust fund’s insolvency date has ranged from two to 28 years. It’s safe to say, then, that since the program is still around – and just recently celebrated its 50th anniversary – those projections have been pretty far off the mark.

In a 2013 report, the Congressional Research Service noted that:

Almost since its inception, the HI trust fund (which is funded through a payroll tax) has faced a projected shortfall. The insolvency date has been postponed a number of times, primarily due to legislative change that have had the effect of restraining growth in program spending.

Indeed, Congress has tinkered with Medicare throughout its history in ways that have at times shortened and other times lengthened the number of years before it’s projected insolvency.

Although you’ll not likely hear Rubio or any of the other Republican candidates acknowledge it, Obamacare (ACA), which they all profess to despise and promise to repeal, has actually pushed the Medicare insolvency date out into the future by several years. In fact, since 2010, when the health care reform law was enacted, the insolvency date has been extended by 13 years. The latest insolvency date projected by Medicare’s trustees is 2030. Prior to Obamacare, it was 2017.

So clearly, one sure-fire way to worsen Medicare’s financial situation and hasten the day of its insolvency would be to repeal Obamacare. (Repealing it would also be a sure-fire way to increase the federal deficit, according to the Congressional Budget Office. That’s because, despite what you likely have heard from the law’s opponents, Obamacare is slowing federal spending on health care to the point that it will reduce the federal deficit by several billion dollars over the coming decade.)

It’s important to keep in mind all the talk about Medicare’s insolvency pertains only to Medicare Part A, which covers hospital care for the program’s beneficiaries. The insolvency date does not apply to coverage for physician and outpatient services (Part B) or prescription drugs (Medicare Part D). As the Center on Budget and Policy Priorities (CBPP) pointed out in a report last July, those parts of Medicare are financed through the program’s Supplementary Medical Insurance (SMI) trust fund, which is structured differently from the hospital insurance trust fund. According to CBPP:

The (Medicare) trustees’ report does not project these part of Medicare will become insolvent at any point – because they can’t. The SMI trust fund always has sufficient financing to cover Part B and Part D costs, because the beneficiary premiums and general revenue contributions are specifically set at levels to assure this is the case. SMI cannot go “bankrupt.”

Although SMI cannot go bankrupt, that doesn’t mean Part B and Part D costs won’t continue to go up. In fact, they’re going up considerably faster than Part A. Much of the uptick in overall Medicare spending in recent years has been because of increases in the cost of physician services and prescription drugs, not hospital care.

One of the reasons the HI trust fund insolvency date has been postponed by several years is because the cost of hospital services covered by that fund has actually decreased for three years in a row. In 2014, the cost of hospital care fell by 3 percent per beneficiary. By contrast, Part B costs increased 4.5 percent per beneficiary. That was still relatively small, though, compared to Part D costs, which increased by double digits last year.

Where to point if you want to point fingers

That’s not surprising when you consider that when Republican lawmakers created Part D during the George W. Bush administration, they specifically prohibited Medicare from negotiating with drug companies for lower prices. That’s a testament to the power and influence of the pharmaceutical industry in Washington, which typically spends more on lobbying than any other sector of the economy.

It’s also safe to say that the Medicare is costing taxpayers more than it otherwise would had it not been for another program created during the Bush years: Part C, better known as Medicare Advantage. Republicans have long wanted to privatize Medicare and the creation of the Medicare Advantage program was an effort to do just that.

As I wrote two years ago, in 2009 alone Medicare paid private insurers 14 percent more per beneficiary than it would cost the government to cover those beneficiaries in traditional Medicare. Between 2004 and 2008, according to the Medicare Payment Advisory Commission, the overpayments totaled nearly $33 billion. Those overpayments have enabled insurers to attract millions of customers. Approximately 30 percent of Medicare beneficiaries are now enrolled in a Medicare Advantage plan.

Thanks to Obamacare, those overpayments have been reduced substantially. That is one of the ways the reform law has made the 13-year extension of the hospital trust fund insolvency date possible.

Another important point to keep in mind when you hear talk about Medicare going bankrupt is that even in 2030, the latest projected insolvency date, incoming payroll taxes and other revenue will be sufficient to pay 86 percent of Medicare hospital costs, according to CBPP. And in 2089 – 74 years from now – there will be enough revenues to cover 84 percent of hospital costs if current projections hold. As CBPP points out, the shortfall can be closed through raising revenues, slowing the growth in costs, “or, most likely, both.”

So the next time you hear a politician predict the imminent demise of Medicare, take it with more than a few grains of salt. It will be around for a long time to come. Assuming, that is, our politicians don’t muck things up.