Home > Blog > Paying through the nose for prescription drugs 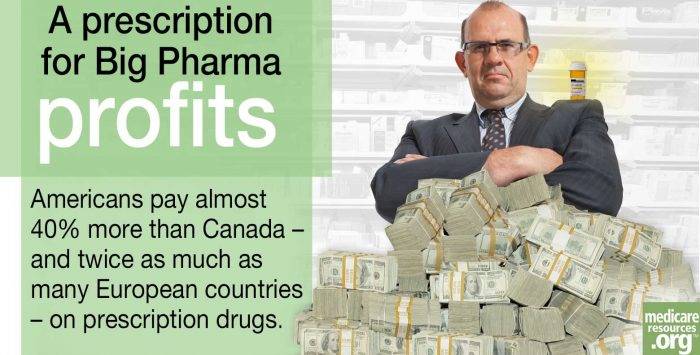 Paying through the nose for prescription drugs

Now that the campaigns for president are in full swing, with the first Republican debate behind us, we can expect to hear plenty over the coming months about what we as a nation must do about our health care system, especially what we must do to make sure that the Medicare program will still be around for future generations. The candidates’ proposals will run the gamut from expanding the program to encompass every one of us – regardless of age – to scrapping it altogether and replacing it with, well something.

Former Florida Governor Jeb Bush, for one, appears to be in the second camp. He made headlines a few days ago when he said during a Koch Brothers gathering in New Hampshire that, because of increasing health care costs, the time may have come for lawmakers to consider dismantling Medicare as we know it.

“We need to make sure we fulfill the commitment to people that have already received the benefits, that are receiving the benefits.” said Bush. “But we need to figure out a way to phase out this program for others and move to a new system that allows them to have something, because they’re not going to have anything.”

His implication was that the Medicare program’s current level of spending is unsustainable. One thing he didn’t mention, however, is that his brother is at least partly responsible for the fact that Medicare now has to spend more than it otherwise would, a situation that is penalizing both Medicare beneficiaries and all of us who pay taxes.

A costly ‘giveaway’ for the elderly

Let’s go back a dozen years. Bush was hoping to be reelected to a second term, and he knew he would need a significant percentage of the senior vote to stay in the White House. Many Medicare beneficiaries were not happy, though, with what they had to pay for their prescription medications.

Bruce Bartlett, who had served as domestic policy advisor to President Ronald Reagan, described it this way ten years later in a column for The New York Times:

“Looking ahead to a close reelection in 2004, he (President Bush) thought a new government giveaway to the elderly would increase his vote share among this group.”

Bush was not alone. Members of both parties announced their support for adding drug coverage to Medicare. Where they parted ways was how to make the benefit affordable.

Most Democrats wanted to give Medicare the authority to negotiate with drug companies. Because of its size, Medicare undoubtedly could strike a pretty good deal by buying in bulk, so long as it had the power to negotiate.

The pharmaceutical industry didn’t like that idea, a fact it made clear to its friends in Congress and the White House. The industry’s lobbyists offered to help write a bill that would help the Republicans politically while guaranteeing a tidy profit for the drug companies.

Lobbyists for the insurance industry also saw an opportunity to make money. They persuaded Bush and Congressional leaders to require Medicare beneficiaries to buy their drug coverage through private insurers. The skids already had been greased: industry executives had contributed millions to campaigns to reelect Bush and the industry’s allies in Congress.

Lobbyists for both industries couldn’t have been happier with the bill that reached Bush’s desk – and which he signed into law on December 8, 2003 – even though it would add billions of dollars to the federal deficit every year. That’s because not only was Medicare barred from negotiating for lower prices – as most health systems around the world do and even as our own Veterans Administration and Medicaid programs have long been able to do – but Congress also failed pass any legislation to generate the tax revenue necessary to pay for what came to be known as Medicare Part D.

In a column for the conservative National Review, Noah Glyn described the law as “perhaps the most prominent example of big-government Republicanism during the Bush years.” Norman Ornstein of the conservative American Enterprise Institute called it a “huge trophy” for the Bush reelection team.

The pharmaceutical lobby, one of the most powerful in Washington, has always been able to kill proposals to institute any kind of price controls on drug makers or that would even allow Americans to order their medications from Canada or other countries, a measure that has attracted bipartisan support. John McCain, the senator from Arizona who was the GOP’s presidential nominee in 2008, is a leading proponent of allowing prescription drug importation from Canada. But drug companies have shown time and again that they call the shots in Washington.

As a consequence, Americans pay far more for their prescription medications than citizens of any other country. In fact, we pay almost 40 percent more than Canada, the next highest spender on drugs, and twice as much as many European countries, including France and Germany. In 2013 we spent exactly 100 percent more per capita on pharmaceuticals than the average of the 34 countries that comprise the Organization for Economic Cooperation and Development (OECD), of which the United States is a member.

That gap will probably only widen in the years ahead. According to Express Scripts, the largest pharmacy benefit management company in the United States, a branded drug that cost $100 in 2008 had almost doubled six years later. This rapid increase in drug prices is one of the reasons why health insurers and employers that offer coverage to their workers are constantly raising not only the premiums we have to pay but also our out-of-pocket costs through higher deductibles and coinsurance rates.

And the spiraling cost of drugs is also why Medicare’s Part D spending is exploding.

Late last month, according to The Wall Street Journal, Medicare’s board of trustees said expensive new medications will help drive a sharp increase in Medicare’s prescription-drug spending over the next decade, “raising annual growth to 9.7 percent between 2015 and 2024, from 6.5 percent in the prior eight years.”

The Journal reported a few days ago that, based on the findings of a new study, the federal government could save between $15.2 billion and $16 billion annually if it could negotiate with drug makers for Medicare Part D medicines and get the same prices that the VA and Medicaid pay.

The Pharmaceutical Research and Manufacturing Association (PhRMA) pushed back, arguing that the Part D program has been successful in keeping total costs low. It said the government’s spending on prescription drugs is actually $349 billion less than the Congressional Budget Office’s 10-year projection.

That talking point, though, is intended to obscure the fact that the government could save even more if Medicare could negotiate for lower prices. Just because the government is spending less than once projected doesn’t mean that we can’t do much better. But don’t expect Congress to do anything PhRMA doesn’t like.

The industry’s influence with Democrats is just as strong as it is with Republicans. That’s why provisions that would have allowed the importation of drugs from Canada and that would have given Medicare the power to negotiate with drug companies were stripped out of the Affordable Care Act before it reached President Obama’s desk.

That was by design. Obama and Democratic leaders had agreed to strip out those provisions when PhRMA said it would spend millions to torpedo Obamacare if the industry didn’t get what it wanted.

That will continue to be the case as long as special interests are able to determine who gets elected and what legislation gets passed.