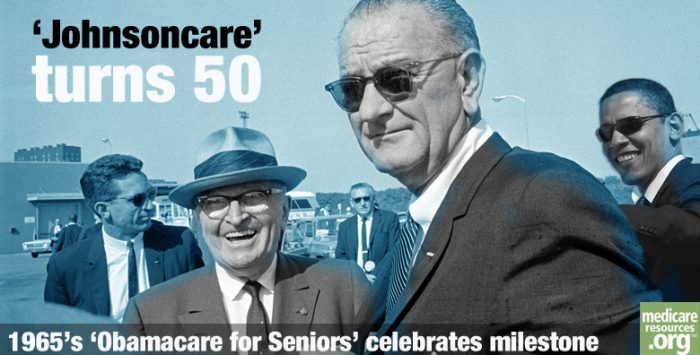 If you’re just a few decades old, you might be surprised to learn that Medicare, the publicly financed health insurance program for America’s senior (65 and older) and disabled citizens is just turning 50 this month. It has become such a part of the nation’s fabric that, unless you know its history, you might think our founding fathers created it.

Not by a long shot. It was many years in the making, even though it had the support of many presidents. That Congress took so long to create it is a testament to the ability of wealthy and entrenched special interests to delay – and in many cases prevent – legislation they feared might cause their income to take a hit, even though it would do immense public good.

The fact that we have such a special milestone to celebrate means that the opposition of wealthy, entrenched special interests can be overcome. But, as we will see, an entirely different group of special interests is now profiting as a result of a very favorable financial arrangement with what has become an immense federal program. They are making such rapid inroads that the original Medicare program may all but cease to exist over the next decade if the program’s supporters don’t wake up to what is a real existential threat.

The first U.S. president to propose a national health insurance program was Teddy Roosevelt in the early 1900s, but he wasn’t able to pull it off. More than 60 years would pass before the stars would align to make it possible.

As harsh as it might sound, Medicare might not have had a birth at all had it not been for the death of President John F. Kennedy in 1963. That’s not to say that Kennedy didn’t support the idea of such a program – he did – but he had a lot on his plate – not the least of which was the Cuban missile crisis of 1962 and the threat of a nuclear war with the Soviet Union.

Creating a program like Medicare was also something Franklin Roosevelt wanted to do, but he didn’t pursue it because he thought that doing so would jeopardize a program he felt was even more urgently needed at the time: Social Security.

His successor, Harry S Truman, did make a valiant effort, but by the time the American Medical Association and its allies, including the U.S. Chamber of Commerce, threw what at the time was an unprecedented amount of money into a long and broad-based crusade to kill it, members of Congress wouldn’t touch it. The AMA took advantage of the country’s intense fear and loathing of communism to dash Truman’s hopes. They persuaded folks – and the people they sent to Washington to represent them – that a taxpayer-financed program like Medicare would lead the nation down the slippery slope toward socialism.

Among those who were persuaded by that argument was five-star World War II General Dwight David Eisenhower, who succeeded Truman in the White House in 1953. Ike had no interest in taking up Truman’s cause. Organized labor was even opposed to the idea for years.

But as the population grew older – and as older folks grew poorer, often because of medical bills they couldn’t pay – the conditions eventually were right for the right president to move. That would be Lyndon Baines Johnson of Texas, who was sworn into office on a plane from Dallas to Washington after President Kennedy’s assassination on November 23, 1963. In his very first speech, Johnson pledged support for Medicare. The election of 1964 resulted in a landslide victory for Johnson over Barry Goldwater and also to large Democratic majorities in both the House and Senate. With such a mandate, Johnson sensed the time was right to finally achieve the dream of so many of his predecessors.

This is how Peter A. Corning put it in The Evolution of Medicare, which the Social Security Administration commissioned him to write:

Even before the election of 1964 … it was becoming clear that Medicare was an idea whose time had come. The need for some program was almost self-evident; the sharp decrease in personal income and greatly increased medical needs of those who had reached retirement age conspired with the rapidly rising cost of medical care to create an imperative. Alternate solutions had been tried or examined and had been found wanting. Consequently, political support for Medicare had gradually increased, while the opposition diminished. Some observers detected a significant fall-off of antagonism toward Medicare within the business community during 1965-65. One sign was the fact that some local Chambers of Commerce reportedly broke with the position of the parent body in Washington, which had always stoutly resisted the proposal. In addition, public support for Medicare rebounded after the brief slump in 1962; polls during 1964 indicated that about two-thirds of the electorate again favored the idea.

LBJ finally got it done 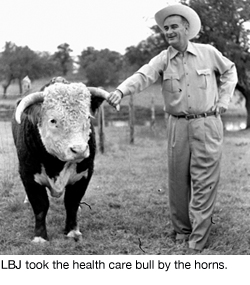 With Johnson’s relentless support, not to mention his legendary arm-twisting ability, Congress finally fell in line. Wanting to honor Truman’s fight for the program, Johnson and Lady Bird flew to Independence, Missouri, on July 30, 1965, to sign the bill, with Truman at his side, in the Harry S Truman Presidential Library. The next year, when the program was ready to roll out, Johnson made sure that Medicare cards one and two would go to Harry and Bess Truman.

On the 35th anniversary of the program in 2000, then Secretary of Health and Human Services Donna Shalala noted that Medicare had already served 93 million Americans. It has served many millions more since then. Today, more than 54 million of us – one of every six of us – are enrolled in a Medicare plan. Over the years, it has become fiercely defended by those who benefit from it. You probably heard stories about Tea Party supporters who showed up at anti-Obamacare rallies in 2009 carrying signs that read: Keep Your Government Hands Off My Medicare. (I can assure you those stories are not apocryphal. I witnessed them.)

As essential as the program has been, it was and still is far from perfect from the perspective of many patient and consumer advocates. It didn’t have a prescription drug benefit during its first 40 years, and it still only covers 80 percent of physician services, outpatient treatments and durable medical equipment. As a consequence, the program spawned new health insurance product: the Medicare supplement policy, which covers most of beneficiaries’ out-of-pocket expenses.

A few years later, Republican lawmakers whose goal was to privatize the program succeeded in passing legislation to enable insurance companies to provide coverage to Medicare beneficiaries – on the government’s dime. To entice them to get in the game, the government agreed to pay them considerably more than what it would cost to provide benefits to Medicare-eligible folks if they stayed in the original program. This not only enabled the insurers to make a tidy profit, it also allowed what are now called Medicare Advantage plans to offer a drug benefit before the traditional program was authorized to do so and to cover all medical costs, not just 80 percent. In exchange, beneficiaries could only get care provided by doctors, hospitals and other facilities that were in their insurance company’s provider network.

Insurance companies have spent billions of dollars over the past few years on sales and marketing campaigns to persuade beneficiaries to enroll in or switch to their Medicare Advantage plans. They’ve been so successful that a third of Medicare beneficiaries – 16.6 million at last count – are now enrolled in Medicare Advantage plans, most of which are operated as HMOs and PPOs. 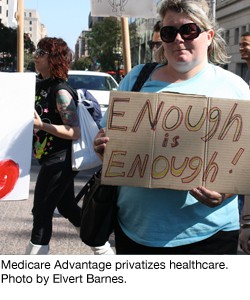 Even though the Affordable Care Act is reducing the overpayments to private insurers that participate in the Medicare Advantage program, it is still a very profitable line of business for the companies that have the most compelling marketing campaigns, that are able to manipulate a feature of the program that allows them to get more money from the government to cover less healthy people, and that cut the most favorable deals with doctors and hospitals.

One of the reasons the insurance industry is now going through another wave of consolidation – Aetna is proposing to pay $37 billion for Humana and Anthem has bid $48 billion for Cigna – is the desire by the acquiring companies to boost their presence in Medicare Advantage. If regulators approve the deals, UnitedHealthcare, Aetna and Anthem will have a collective market share of almost 50 percent.

An indication of just how important Medicare Advantage is to health insurers is the recent announcement that America’s Health Insurance Plans, the industry’s biggest PR and lobbying group, has recruited former Medicare administrator Marilyn Tavenner to be its next CEO.

I’m betting that Truman and Johnson would be alarmed to see how private insurance companies – which priced coverage so high for the nation’s elderly before Medicare was enacted that most of them were uninsured – have been able to slowly but surely come within striking distance of dominating the program.

If Medicare Advantage enrollment trends continue – and there is no reason to believe they won’t – within a few years, possibly before the end of this decade, we will reach a tipping point in which more people will be enrolled in private plans than in the original program.

That very real possibility should be of great concern to health care reform advocates who think Americans would be much better off if all of us – not just senior citizens and the disabled – were enrolled in an improved, “Medicare for All” program.

The word “improved” in that last sentence is essential. As medical costs continue to go through the roof, the 20 percent coinsurance obligation in the traditional program will make the Medicare Advantage plans increasingly attractive. If I were leading the strategy for the “Medicare for All crowd,” I would focus a lot of attention on strengthening the traditional program to make it every bit as comprehensive and attractive as a Medicare Advantage plan.

If that doesn’t happen, Medicare’s next significant birthday will be celebrated most enthusiastically by the shareholders and executives of private insurance companies.