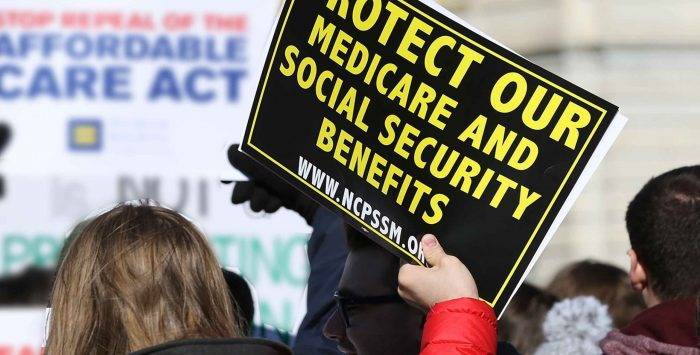 President Trump's plan to 'inject competition' into Medicare aims to do exactly what Trump charges his opponents with doing: ending the Medicare guarantee of comprehensive coverage at an affordable price. Flickr photo by AUCD

Not content with his efforts to destroy U.S. democracy, President Trump is now bidding via executive order to destroy Medicare.

Issued on October 3, Trump’s order instructs the Secretary of Health and Human Services (HHS) to take steps aiming to

The Trump administration probably can’t fully activate this agenda by administrative fiat. Many of the ordered changes would require legislation. But the administration may find wiggle room to put demonstration projects along these lines in motion. Within HHS, the Center for Medicare and Medication Innovation (CMMI), created by the ACA “to test innovative payment and delivery system models,” can be used to deploy such pilot programs.  And Trump’s HHS has shown a willingness to issue administrative guidance that violates statute – for example, in its rules for how states can alter their Obamacare marketplaces. If Trump remains in office after 2020, he will have further scope to push Medicare in these directions.

Let’s dive into how these measures to unmake Medicare as we know it would work.

Medicare is relatively affordable for seniors and the federal government because the government controls the rates paid to healthcare providers. Medicare pays hospitals about half as much as commercial insurers do on average and pays doctors about three quarters as much.  Private Medicare Advantage plans pay rates close to those paid by traditional, fee-for-service Medicare because the government pays them on a per-customer basis that’s based on the government’s payment rates.

That’s Trumponomics for you – inject “competition” into a market by inducing the lower payers to pay rates comparable to those paid by the highest payers.

Providers get more, seniors get less

The order’s direction to pursue “use of MA-negotiated rates to set FFS [traditional] Medicare rates” recalls Paul Ryan’s proposals to convert Medicare to a voucher system — that is, to provide enrollees with a fixed sum they would use to pay for plans offered in a “marketplace” in which traditional Medicare is one option among many.

Without the government-set benchmark, Medicare Advantage plans might indeed end up paying commercial rates – that is, those paid in the employer and individual markets. As rates rise, the federal contribution might rise more slowly, leaving seniors to pay a rising share of their costs (in some versions of his “premium support” proposals, Ryan proposed capping increases in the federal contribution to a rate that would not keep up with medical inflation).

If the rising costs are not offloaded on Medicare beneficiaries, the higher payment rates would likely deplete the Medicare Trust Fund and bust the federal budget.

The order also calls for rule-making that would end Medicare enrollees’ protection against balance billing. In commercial markets, balance billing occurs either when an insured patient goes to an in-network hospital and is billed by out-of-network doctors working there, or when she schedules a procedure with an in-network provider and is billed by assisting out-of-network providers, such as an anesthesiologist.

About 20% of ER visits and 9% (or more) of inpatient hospital visits for commercially insured patients result in a surprise bill – often in the thousands or tens of thousands of dollars. Balance billing is a cash cow for physicians in certain specialties – and driven in large part by mega-practice groups and staffing companies owned by private equity firms. Physicians in specialties where balance billing prevails – such as anesthesiology, emergency medicine and radiology – typically bill at four, five and six times Medicare rates.

At present, over 95% of physicians participate in Medicare, and they are barred from balance billing Medicare patients. A very small percentage of providers are not participants in Medicare but accept Medicare patients – and they can balance bill only within very tight limits.* Just 1% of physicians don’t accept Medicare at all – and they must disclose this to prospective patients and have them sign a release spelling out that they agree to pay what the doctor, um, orders.

Such consumer protection does not sit well with the Trump administration. The order directs HHS to propose

a regulation that would eliminate burdensome regulatory billing requirements, conditions of participation, supervision requirements, benefit definitions, and all other licensure requirements of the Medicare program that are more stringent than applicable Federal or State laws require and that limit professionals from practicing at the top of their profession.

In Trumpspeak, enabling doctors to practice at the top of their profession means freeing them to bill Medicare enrollees at rates they bill in the private sector.

Note too the assertion that current regulations are “more stringent than applicable Federal or State laws require.” That language suggests that in the Trump administration’s interpretation, these rules can be loosened without violating the statute.

A private market for the super-rich

The conservative desire to untether Social Security from Medicare enrollment is not new. As health law professor emeritus Timothy Jost of Washington & Lee University recounts, some years ago, former House Majority Leader Dick Armey and two other plaintiffs filed suit seeking to affirm their right to opt out of Medicare once they had enrolled in Social Security, asserting that they wanted to buy private insurance. In 2012 Judge Brett Kavanaugh, then on the D.C. Circuit Court, ruled that opting out of Medicare once one had enrolled in Social Security is prohibited by statute. So HHS might have trouble altering this provision by fiat.

The same section (Sec.11) orders HHS to “remove unnecessary barriers to private contracts that allow Medicare beneficiaries to obtain the care of their choice and facilitate the development of market-driven prices.” There again is the privilege for wealthy seniors who do enroll in Medicare to agree to be balance billed at rates well above Medicare, perhaps for “skip the line” privileges. For those so inclined, the order also directs HHS to reduce barriers to obtaining tax-sheltered Medicare Savings Accounts, which currently must be paired with specially designated high deductible Medicare Advantage plans.

What’s the motive for creating these ultra-lux markets? The chief beneficiaries of high-end private senior markets would be providers who want to serve the superrich at absolute top dollar. If such a market gets traction, more physicians will likely opt out of Medicare, which may devolve to the equivalent of coach-class air travel.

The first sentence of Trump’s order proclaims, “The proposed Medicare for All Act of 2019, as introduced in the Senate … would destroy our current Medicare program.” In fact, if Bernie Sanders’ bill were enacted as written, Medicare coverage would be vastly expanded, and virtually every provider in the country would accept it – which isn’t to say that implementation might not cause serious disruption.  In true Trumpian fashion, however, this order aims to do exactly what Trump charges his opponents with doing: ending the Medicare guarantee of comprehensive coverage at an affordable price.

Andrew Sprung is a freelance writer who blogs about politics and policy, particularly health care policy, at xpostfactoid. His articles about the rollout of the Affordable Care Act have appeared in The Atlantic and The New Republic. He is the winner of the National Institute of Health Care Management’s 2016 Digital Media Award. He holds a Ph.D. in English literature from the University of Rochester.