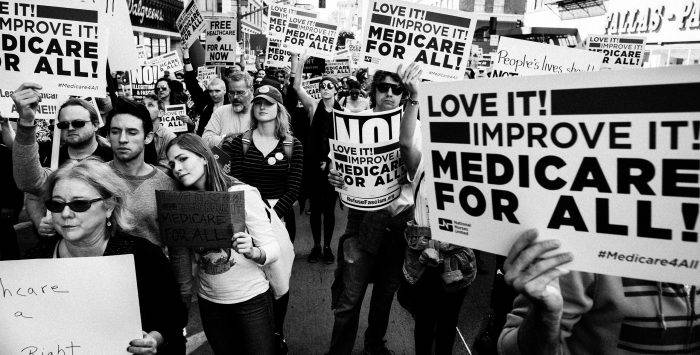 “Medicare for All.” It’s one of the hottest topics and endlessly trending conversations in the U.S. right now. Presidential candidates – and the media who cover them – can’t stop talking about their proposals to expand Medicare access to all – or “all who want it.”

The phrase strikes a chord. It makes intuitive sense to most Americans that access to a program like Medicare – now limited to about a fifth of the American population – would be good for everyone.

Recent polling from the Kaiser Family Foundation shows that the idea of expanding Medicare access is popular. Slightly more than half of Americans support Medicare for all (the concept, not Bernie Sanders’ bill per se), while three quarters support a Medicare buy-in for those who want it, or a buy-in for people ages 50-64.

This, despite the fact that a majority of Americans under age 65 are currently covered by commercial insurance, mostly through employers.

Medicare has a familiar ring for voters

The phrase “Medicare for all” has the alluring simplicity of a credo, and it resonates emotionally with millions of Americans. But it means different things to different people.

While Sanders and other candidates would radically revamp the current program, Kaiser polling shows that to most Americans, “Medicare for all” suggests something much like Medicare as we know it: a program with modest premiums and predictable out-of-pocket costs, offering individuals a choice between public and private coverage or a combination of the two.

Why so much love?

Why do three quarters of Americans feel that everyone should have access to Medicare, however they understand the program as it currently exists?

“Medicare” is a strong brand in America. In a country in which many feel unsure whether they’ll be able to keep their current coverage, or whether that coverage will render the healthcare they need affordable for them – and where tens of millions of people at any given time have no coverage at all – the program feels like a bulwark. Contrast those weaknesses with the stability and security of Medicare:

Americans pay a Medicare tax for their entire working lives in this country. Everyone with at least ten years’ work experience here, or with a spouse who meets that standard, is covered at age 65. While those who live long lives will likely get more out of the program than they paid in, people feel that they’ve earned Medicare coverage, and that it’s part of being American.

Choice of public plan, private plan, or public plan plus private supplemental. “Traditional” Medicare, in which the government pays the bills (minus the enrollee’s co-pay), provides enrollees with an almost unlimited choice of providers – all hospitals, and almost any physician who is accepting new patients. The enrollee’s share of costs is not capped, however, and can run quite high in an extended hospital stay or for expensive prescription drugs.

Private Medicare Advantage plans offer the added security of an annual cap on enrollee’s total costs – plus, in many cases, extra services such as some dental or vision/hearing coverage. The tradeoff is a limited choice of providers: the plan will only cover services provided by in-network doctors and hospitals.

A third option is traditional Medicare plus supplemental (private) “Medigap” coverage that picks up some or virtually all of the enrollee’s out-of-pocket costs without limiting provider choice. Medigap coverage is more expensive than Medicare Advantage plans, however. There are several government-approved plan types that cover out-of-pocket costs to varying degrees. Employers often provide Medigap coverage to retirees.

Moderate premiums, predictable copays. For those who choose “traditional” Medicare, hospital coverage (Part A) is free for all who qualify for the program. For all but the wealthiest 5% of the population*, the premium for physician coverage (Part B) is $135.50 per month (or slightly less for those who have been collecting Social Security for some time). Prescription drug coverage is usually another $30 to $40 per month. Deductibles are $185 for Part B, $1,364 for a hospital stay (Part A), and variable for Part D. Private Medicare Advantage plans usually include drug coverage, in some cases cost no more than the Part B premium, and, most important, cap annual out-of-pocket costs.

The strongest Medigap plans cover virtually all out-of-pocket costs, but they’re expensive – in the neighborhood of $200 per month. Combined with the Medicare Part B and D premiums, that means about $400 per month for near total coverage. Low-income Medicare enrollees – about a fifth of the total – are also enrolled in Medicaid or Medicare Savings Programs which pick up some or all of their premiums and out-of-pocket costs.

No balance billing. Americans covered by commercial insurance are often plagued by “balance bills” or “surprise bills,” sent by physicians or other providers who are outside the provider network of the patient’s insurer.

Because hospitals have widely outsourced emergency, radiology, anesthesiology and other departments – largely to staffing companies owned by private equity firms – patients are stuck with these bills with appalling frequency. About 20% of ER visits and 16% of inpatient hospital visit result in a surprise bill – often in the thousands or tens of thousands of dollars. Of insured nonelderly adults surveyed by Kaiser, 39% report receiving an unexpected medical bill in the last 12 months.

It’s not perfect, but it still sounds better

Medicare is far from perfect. The panoply of choices from private providers – Part D plans, Medicare Advantage plans, Medigap plans – can be confusing. The costs can eat up a large percentage of income for those who are not wealthy but don’t qualify for Medicaid or MSP coverage. There is no cap on out-of-pocket costs for those who stick with traditional Medicare and don’t have supplemental coverage. (About 10% of all Medicare enrollees are in this situation.)

What’s more, the program does not cover long-term nursing care, dental, vision or hearing services. More than a quarter of U.S. seniors spend at least 20% of their income on premiums plus out-of-pocket costs, according to the Commonwealth Fund.

All that said, Medicare provides heavily subsidized, reliable, and comprehensive medical coverage to nearly all Americans when they turn 65, and to about 9 million on Social Security Disability. Coverage and claims processing is comparatively hassle-free, and balance billing is not a worry. Millions of Americans worried about healthcare costs and coverage exhale when they turn 65. The notion that such security should be available to all is supported by a large majority.

Andrew Sprung is a freelance writer who blogs about politics and policy, particularly health care policy, at xpostfactoid. His articles about the rollout of the Affordable Care Act have appeared in The Atlantic and The New Republic. He is the winner of the National Institute of Health Care Management’s 2016 Digital Media Award.