Home > Blog > Why Mom went back to traditional Medicare 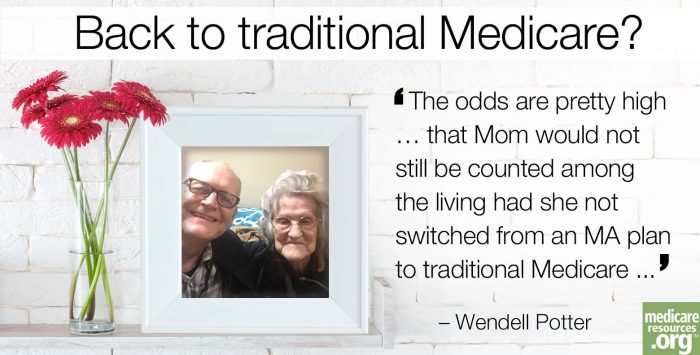 Why Mom went back to traditional Medicare

If you’re newly eligible for Medicare or trying to decide whether to switch from traditional Medicare to a Medicare Advantage plan – or enroll in a Medicare Part D drug plan – you’ve got less than three weeks to decide before the current open enrollment period ends on December 7. So if you haven’t yet started checking out your options, it’s time to get on the stick.

It might be time to choose an Advantage plan

If recent history is prologue, one of every three people newly eligible for Medicare will find the siren call of the Medicare Advantage TV commercials irresistible. And for some of you, an MA plan might be the way to go – at least for now. Some of them offer benefits not available through original Medicare, like vision and dental coverage, gym memberships and even hearing aids. But there are trade offs you need to be aware of.

I’m writing this while sitting next to my mother, who turned 91 a couple of months ago. I’m happy to report that she is a relatively healthy nonagenarian. The odds are pretty high, though, that Mom would not still be counted among the living had she not switched from an MA plan to traditional Medicare when she was critically ill a few years ago.

Here’s something you might not know: many Medicare Advantage enrollees do exactly what Mom did after a serious illness or injury, and the MA plans they “disenroll” from couldn’t be happier to see them go. When they go back to traditional Medicare, the MA plans are off the hook for covering expensive care.

As I learned later, the circumstances that convinced my mother she would be better off in traditional Medicare were shared by hundreds of thousands of other elderly Americans. The evidence that my mother’s reason for switching back to original Medicare was far from an isolated case came from two very credible sources in 2013: a researcher at the Centers for Medicare and Medicaid Services (CMS), and a team of researchers independent of CMS, led by a Harvard Medical School professor, who published their findings in the journal Health Affairs.

The CMS researcher, Gerald Riley, looked at the experiences of more than 240,000 people who switched from MA plans to traditional Medicare and compared them with beneficiaries who had always been in the original program. He found that in the six months after returning to traditional Medicare, the former MA enrollees used an average of $1,021 in medical services each month. Those who had never been in an MA plan cost Medicare just $710 a month.

Similarly, the study published in Health Affairs found that people who had returned to original Medicare from an MA plan were far more likely than other beneficiaries to report declining health. Kaiser Health News quoted J. Michael McWilliams, the Harvard professor who led the research team, as surmising that “beneficiaries who developed serious ailments might leave the (MA) plans to get unfettered access to physicians and treatments through traditional Medicare.”

The term “unfettered access” is especially important. It certainly was to my mother. After being hospitalized for a broken hip, Mom was discharged to a skilled nursing facility for rehab. Her progress, though, was slow, and she was flat on her back much of the time. After several days there, she began to develop bedsores, and the staff at the facility wasn’t making progress treating them.

Before too long, the head nurse took me aside and told me that another nurse – not at the facility but at Mom’s Medicare Advantage plan – had come to the conclusion that the skilled nursing was no longer “medically necessary.” This other nurse – a so-called “utilization management” nurse – had never laid eyes on my mother, much less treated her. But she was able to insert herself between my mother and her treating physician and, for all practical purposes, determine whether or not she would get the care her doctor said she needed.

With my help, Mom appealed the UM nurse’s decision. She won a temporary stay of execution in the form of a coverage extension for another week of care. But that was it.

I knew that ending coverage for Mom’s skilled nursing care would be a death sentence, so, with her approval, I started the process of switching her back to traditional Medicare. At the same time, I also made arrangements for Mom to be transferred to a facility that not only had a good reputation for treating patients with bedsores but also, coincidentally, did not work with any MA plans, only traditional Medicare.

The administrators at the facility where I had Mom transferred had decided years before that they couldn’t in good conscience continue working with insurance company UM nurses who could – and often did – deny coverage for further care despite the pleas of both patients and their doctors.

Only in original Medicare can a patient count on getting “unfettered access” to doctors and facilities of their choice – and, in many cases, to life-saving care. The Kaiser Health News article that reported the result of those 2013 studies quoted Judith Stein, executive director of the Connecticut-based Center for Medicare Advocacy, a patient advocacy group, as confirming the disparity in access to needed care.

“Private Medicare Advantage plans work for people when they are relatively well, but fall short of traditional Medicare when they are sick or disabled,” she said. “This is particularly true for our clients with long-term and chronic conditions, many of whom also have low incomes. They are often denied coverage for necessary skilled care, or it is terminated before it should be, while the same coverage would be available in traditional Medicare.”

I encourage you to keep all of this in mind as you make decisions during the current or future Medicare open enrollment periods. Depending on your age and health, you might be better off staying with traditional Medicare and supplementing it with a Medigap plan.