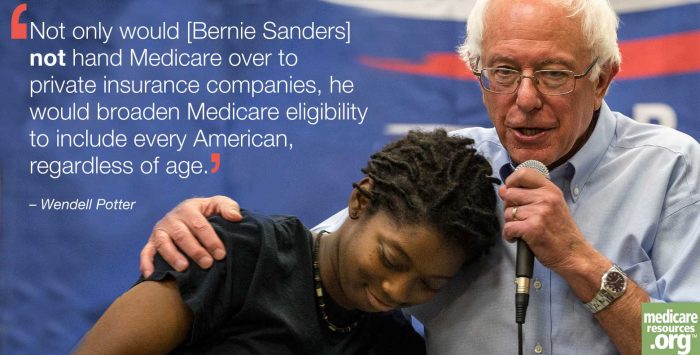 If you’ve watched all of the presidential debates so far – both Democratic and Republican – and you were waiting for the candidates to tell you if and how they would change Medicare, you are still waiting.

Not one of the candidates has provided much in the way of insights on the debate stage about how they view a program that is of vital interest to every one of us, regardless of our age.

So we’ll have to look elsewhere for clues. 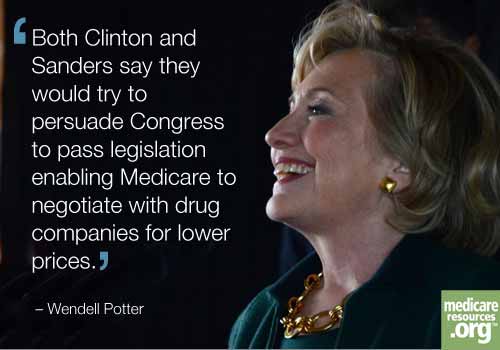 It’s safe to say that on the GOP side, the 15 remaining candidates – all of whom seem to have been persuaded that commercial health insurers can do a better job than the government – would do their dead level best to privatize Medicare. On the Democratic side, the candidates’ views range pretty much from keeping the program as it is or as it is evolving with maybe a few tweaks (Clinton) to expanding it to cover every last one of us (Sanders).

The Republicans’ privatization dream isn’t new. It’s been around for decades. Keep in mind that the GOP and its allies did all they could back in the 1960s to keep Medicare from happening in the first place.

One of Ronald Reagan’s first forays into public policy was to be the voice of the American Medical Association’s propaganda campaign against early Medicare legislation in 1961. As I wrote in my first book, Deadly Spin, the AMA cloaked this effort, called Operation Coffeecup, in a low-key shroud fronted by the association’s own Women’s Auxiliary, whose members invited their friends and colleagues to about 3,000 neighborhood kaffeeklatches across the country.

Once confined and regaled with hospitality, guests were entertained further by their hostesses, who played a professionally cut vinyl LP titled “Ronald Reagan Speaks Out Against SOCIALIZED MEDICINE.”

Republican candidates have been railing against a perceived threat of socialized medicine ever since. Many of them warned us repeatedly five years ago that Obamacare would lead us down the “slippery slope toward socialism.”

If one of the Republican candidates makes it to the White House, it’s a safe bet he or she would dust off the Medicare-privatization plan that Rep. Paul Ryan of Wisconsin, who was Mitt Romney’s running mate in 2012, unveiled last year with considerable fanfare.

Ryan, who chairs the House Budget Committee, proposed as part of the GOP’s federal budget for 2015 that Medicare be turned into a “premium support” plan. If it had made it into law, not only would most future seniors be in a private health insurance plan, over time they would be obligated to pay increasing amounts of money out of their own pockets for medical care.

Ryan – the man the GOP caucus reportedly is pressuring to jump into the race to replace Rep. John Boehner as House Speaker – wants to create a system of insurance vouchers that Medicare beneficiaries would use to shop for coverage on the private health insurance market. Unlike previous GOP privatization plans, Ryan’s “blueprint,” as he called it, would allow seniors to remain in the traditional Medicare program if they wanted to.

But – and it’s a big but– doing so would require them to pay considerably more out of their own pockets over time than they do today. By structuring the program the way Ryan proposed, millions of Medicare beneficiaries undoubtedly would think it would be in their best interests to switch to a private plans under the assumption that it would be more affordable.

The problem with vouchers

The problem with that thinking is that the annual vouchers likely would not keep up with medical inflation. Private insurance companies most certainly would do what they are doing today as a way to reduce the amount of money they have to pay out in claims: increase their policyholders’ deductibles on a regular basis.

So while the private Medicare plans under Ryan’s blueprint might offer lower premiums than the cost of traditional Medicare, the deductibles would go up, probably on an annual basis, and probably at a faster clip than the premiums.

It’s worth noting that over the past decade, deductibles for private insurance plans have increased seven times faster than wages. That means that Americans under the age of 65 who are in high-deductible plans are spending a much larger percentage of their incomes on health care than a decade ago.

Another concern with Ryan’s plan is that Americans are not very good at picking health plans. As a result, they wind up paying more for care than they would if their health plan picking skills weren’t so lousy. There often are so many plans to choose from that people are bewildered and don’t take the time necessary to try to find the plan best suited to their needs.

It should come as no surprise that people despise having to wade through the jargon of a health insurance plan. A recent survey by Aflac found that 45 percent of those polled would rather clean out their email – and 26 percent would rather clean their toilets – than research their health benefits.

Nevertheless, most Republican politicians are wed to the idea of handing Medicare over to the private insurance industry, despite the fact that traditional Medicare, because of its size, can demand lower prices from health care providers than private insurers. Private insurers on average pay 20 percent more for health care services than Medicare.

Dems would build on Obamacare provisions

On the Democratic side, former Secretary of State Hillary Clinton supports changes already being implemented as a result of Obamacare. Under the law and recent goals set by the Department of Health and Human Services, Medicare is moving toward paying providers based on quality rather than on the quantity of care they give patients.

Both Clinton and Sanders say they would try to persuade Congress to pass legislation enabling Medicare to negotiate with drug companies for lower prices. (The pharmaceutical industry has blocked similar legislation several times in the past.) They would also allow Americans to re-import drugs from Canada to save money. Drug re-importation bills have had bipartisan support in the past but have failed to pass because of opposition from pharmaceutical companies.

Sanders would also try to close the “doughnut hole” in the Medicare prescription drug program by 2017, three years earlier than scheduled under the Affordable Care Act. But Sanders’ overarching goal is to take Medicare in the exact opposition direction from where Republicans hope to take it. Not only would he not hand Medicare over to private insurance companies, he would broaden Medicare eligibility to include every American, regardless of age.

Sanders has long supported a single-payer health care system like many other countries in the developed world have. He frequently points out that about a third of the more than $3 trillion we spend on health care goes to cover administrative costs. Most of those costs would be eliminated under the Medicare-for-All type of system Sanders advocates, resulting in billions of dollars in savings annually – savings that could be used to bring all Americans into coverage.

As you can imagine, the health insurance industry will be spending millions of dollars between now and November 2016 to increases the chances that the next occupant of the White House is a Republican.