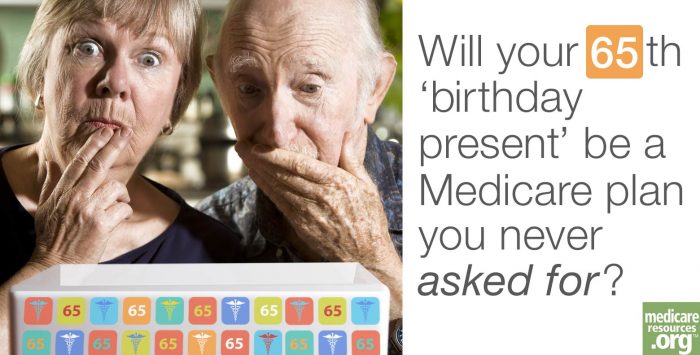 For the thousands of Americans who turn 65 each day, Medicare coverage is – in most cases – a long-awaited and welcomed healthcare safety net. But recently, an increasing number of beneficiaries have been raising an outcry about Medicare coverage they received – but never asked for.

Untold numbers of Americans last year reached age 65 and qualified for Medicare only to find they’d been enrolled in a Medicare Advantage plan they didn’t select – and often did not want – according to data reported by the federal government and InsideHealthPolicy, which recently reported that some portion of about 15,000 individuals could have been impacted:

… for the 2015 plan year, Medicare Advantage plans approved to offer seamless enrollment submitted 15,232 enrollment transactions that could have included beneficiaries who were auto-enrolled.

The Centers for Medicare & Medicaid Services hasn’t provided hard numbers for those who’ve been seamlessly enrolled to date. But last Friday, the agency responded to a growing controversy over the practice by issuing a moratorium on approval of requests from carriers seeking to seamlessly enroll members into Medicare Advantage until CMS is finished revising its rules to ensure consumers are protected.

Seamless conversion is a process that allows a health insurance company to enroll a member of its marketplace or other commercial or Medicaid plan into its Medicare Advantage coverage when that individual becomes eligible for Medicare. It isn’t new (29 issuers already have approval to use the process), but frustration over the practice has been growing as more middle-income people are moved into what’s now known as Medicare Advantage without their consent.

Since the 1990s, approved insurers have been allowed to enroll their non-Medicare customers into Medicare Advantage coverage. The government began allowing seamless conversion at a time when some Medicare insurers were struggling to turn a profit. Those same insurers suggested they might abandon their private Medicare business altogether if they didn’t get a boost in funding.

Insurers got that funding boost, and a conversion policy that ultimately led to a new and potentially profitable customer base. But the policies were designed over a decade ago, and today more than ever, advocates have been calling for a rewrite to account for new types of healthcare consumers.

Why would the federal government have allowed for implementation of the practice in the first place? “I’m certain it was to benefit the insurers,” says Wendell Potter, a former Cigna public relations executive (and a regular contributor to healthinsurance.org and this site). “Yes, it could be argued that consumers would be ‘spared’ the challenge of making a decision, but the goal was to build enrollment for the private alternative to Medicare.”

In response to a recent appeal from Medicare rights advocates, CMS revealed that 29 insurer organizations have been approved to convert current members into Medicare plans including Aetna, UnitedHealth Group and several Blue Cross and Blue Shield insurers, according to Modern Healthcare. Most of the members are in Medicaid plans, according to InsideHealthPolicy.

Process happens in a cloud of confusion

In order to automatically move policyholders to Medicare Advantage (MA), a consumer’s current insurer must mail the policyholder a letter at least 60 days in advance to let the customer know they’re about to be enrolled in the carrier’s MA plan – with a chance to opt out.

And while a portion of Americans about to qualify are told they’ll soon be eligible for Medicare, many members are not.  But private insurers have marketing lists that cover almost everyone about to age into Medicare. Their sales letters often overpower the few (if any) important notices consumers should get about enrolling in Medicare Part A and Part B and the importance of making an informed choice about how to receive their new Medicare benefits.

Too often, consumers may receive an automatic enrollment notice with an opportunity to opt out but the letter ends up lost, ignored, or recycled.  Or just misunderstood.  (Who reads every piece of mail from their insurance company? I once had a client tell me she gets so many letters related to Medicare and health insurance that it’s overwhelming and she “throws all of them in the trash.”)

But consequences of not reading this notice can be dire.

But if you’re moving from a marketplace or individual market plan into Medicare, you probably aren’t eligible for Medicaid and need to seriously consider Medigap supplement coverage, Part D plans for medications, or a Medicare Advantage plan that covers your health care providers in its network. If you miss out on the initial opportunity to enroll, you can’t easily change your coverage later – even if you simply missed reading one letter of the hundreds you get from insurance companies.

There’s an obvious financial downside for a seamlessly converted beneficiary as well. When you’re automatically moved to a Medicare Advantage plan instead of traditional Medicare, you could end up with a plan whose network doesn’t include your doctor or hospital. And that could cost you thousands in costs that Medicare and the new MA plan won’t cover.

Why people are alarmed about it right now

Until recently, most people were seamlessly converted from Medicaid or employer coverage. Medicaid members have lower incomes that sometimes allow for an “out” if the Medicare Advantage plan pre-selected for them doesn’t work; and people with employer coverage may end up converted to a Medicare Advantage plan that offers special employer benefits that make that plan a more obvious choice.

But private individual plan consumers have no way to benefit from seamless conversion, because they’re not being converted to anything with special benefits and don’t have an “out” if the plan chosen for them isn’t all that great. This is why advocates are pushing for change.

Medicare advocacy groups have suggested several ways seamless conversion could work better including requiring that consumers have opted-in to the process in order for their insurer to seamlessly enroll them in Medicare Advantage.

Advocates also want CMS to give anyone – not just people who also have Medicaid and already have that flexibility – an “out” if they are converted to Medicare Advantage. This special enrollment period would allow those who have been converted to choose another Medicare Advantage plan or move back to Original Medicare and select a Medigap plan – before their right to buy one runs out.

Finally, the Medicare groups want CMS to provide better and more specific warning letters and phone calls to people who’re going to be converted so they can understand the consequences of not opting out and shopping for a plan themselves.

Avoiding conversion (without your knowledge)

Keep your eye out. Watch for the seamless conversion notice in the mail. You can also call your insurer and ask whether people in your current plan will be auto-enrolled into Medicare Advantage. (There’s no guarantee that the first representative you reach will know, so keep pushing until you reach someone who could have an answer.)

There is no standard notice. Because there seems to be no standard for how the seamless conversion letter will look, be really careful and read all your mail in the months leading up to your 65th birthday.

Weigh the benefits of a Medicare Advantage plan. If your insurer does write to let you know you’ll be seamlessly enrolled, be sure to understand all your options. Compare your pre-selected Medicare Advantage plan’s benefits and costs (including provider networks) and opt out of seamless conversion unless you’re sure you want the plan that’s been pre-selected for you in the notice.

Consider Medigap coverage. Always compare your costs with what you might pay under a Medigap plan. Having this coverage to supplement Original Medicare might be a better fit for you if you have or think you might end up with a lot of medical costs in the future. And remember that if you are interested in Medigap, you could lose out on your ability to purchase a Medigap plan if you’re seamlessly enrolled in Medicare Advantage.

Make sure you cancel your non-Medicare plan. When you transition into Medicare, your marketplace or individual market coverage won’t end on its own. It’s important to line up your new Medicare coverage start date and the end date for your prior plan so you don’t have a gap in coverage.

There is unbiased help available to you

You can get in-person help through your State Health Insurance Assistance Program (SHIP). These volunteer counselors have access to the latest information regarding which insurers are converting people to their Medicare Advantage plans.

You can also contact 1-800-MEDICARE, the government’s call center, for more information – or seek advice from a licensed agent or broker specializing in Medicare coverage.

Help is on the way

Because of work by the Medicare Rights Center, National Council on Aging and other advocate and aging groups, you may be among the last people to face the risk of seamless enrollment. During CMS’s moratorium on approval of new plans, the government is rewriting all its policies related to seamless enrollment to make sure consumers are protected. While we don’t know the exact fixes CMS will propose, help is on the way.

Because the changes aren’t in place yet, it’s more important than ever to be a smart consumer and avoid being seamlessly enrolled into a Medicare Advantage plan that doesn’t work for you. Medicare enrollment is complex, and it pays to shop around and consider all your options – not just what may be picked for you.