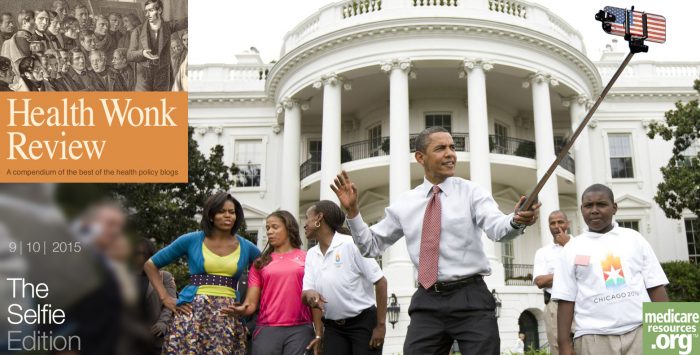 Selfies: Love ’em or hate ’em, you can’t escape them these days. Everywhere you turn, seems there’s someone composing a duck face for their eager followers.

And come on folks, let’s just admit right now that we’re all guilty of the occasional hastily composed, hand-held shot. It’s the perfect way to provide our status to our beloved family, friends and co-workers without – you know – having to actually make a phone call.

(If you think about it, we’re actually doing folks a favor by sending selfies and keeping them in the loop. Heck, they should probably be called selfless-ies.)

Right. So I actually dubbed this week’s edition of Health Wonk Review The Selfie Edition after I was inspired by David Williams’ thought-provoking post at Health Business Blog. In Ready for the EyeSelfie for diagnosing health problems? Harlow informs us that we’re not that far from being able to diagnose health problems with “selfies” of the eye. It’s a must-read.

Another must-read (and another fascinating preview of medical technology ahead)? Bill Danylik’s very first submission to HWR over at the Workplace Wellness Blog. Everyone say, “Howdy, Bill!”

And since we’re on a technology roll, definitely dig into Tom Lynch’s look at your future workforce in The AI Robotic Tsunami: Coming To A Workplace Near You. Worried about your organization’s healthcare costs? Tom says your future medical provider might need to be an engineer. Good stuff.

Less worthy of a selfie? It might be electronic patient records, which Peggy Salvatore awarded the none-too-flattering moniker A Regulatory Morass* over at Health System Ed. Peggy says EHRs once held the promise of improving patient health and lowering costs, but now government and payers have regulated the promise out of the electronic patient record.

“Electronic patient record documentation is going down a dark alley right now,” Peggy says. (And we all know a dark alley is a terrible place to take a selfie.)

Yeah. You knew there would be a bunch of them.

Let’s start them off with Joe Paduda’s post over at Managed Care Matters. Joe has a recent snapshot of the Affordable Care Act’s impact on employment. In his post – Affordable Care and jobs: the data shows …, he says the data shows that predictions of lost full-time jobs has turned out to be wrong. Frame it!

In Access to healthcare in Colorado: A new day, but there’s still work to be done, Louise Norris says folks in Colorado have reason to “smile for the camera.” The Colorado Health Access survey results are just out, and they reveal that Colorado’s uninsured rate has dropped from 14.3 percent to 6.7 percent.

Well, unfortunately, the picture’s not all rosy just yet. Norris reports that the survey also revealed there’s still a significant underinsured problem – and that one in ten Colorado residents skipped seeing a doctor or filling a prescription due to cost. Say “Cheese?”

Are ACOs ready for their close-ups?

We’ve got two posts zoomed in on Accountable Care Organizations and neither post is what you might term a Glamour Shot.

Dr. Jaan Sidorov over at The Population Health Blog offers up what he calls a “contrarian perspective,” scrutinizing the economic findings from the recent CMS report on how its ACOs fared in 2014. His post title pretty much says it all: The Majority of Medicare ACO Participants Appear to Have Lost Money in 2014.

“Is this exercise in risk transfer the right approach to health reform?” Sidorov wonders.

Likewise, David Harlow at HealthBlawg weighs in with Accountable Care Organizations: The Show So Far. I’m sensing a some skepticism as David describes his post about the past year’s experience in the ACO market as “looking behind the rosy spin put on it by CMS.”

Medicare’s 50 years in – and there are loads of heart-warming pics of LBJ and Harry S Truman, but is today’s safety net ready for Instagram?

A couple more selfies for the album

Don’t put down the smart phone just yet. We’ve got a few more pieces of eye candy that don’t fall neatly into those other albums:

Phew. That’s a lot of selfies to take in. And I highly recommend that you do actually take them in.

And then come back for another compendium of compelling health policy posts on September 24. Check back at healthwonkreview.com to find out who’s hosting the next edition.

Until then, be good to your selfie!