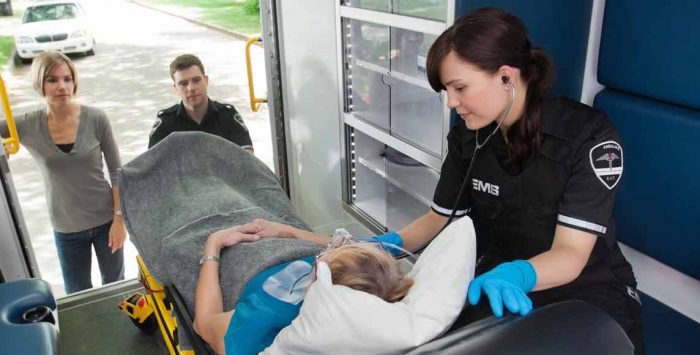 Medicare will pay for ambulance services under specific circumstances, but it's important to know what these are to avoid hefty bills.

A. Medicare will pay for ambulance services under specific circumstances, and it’s important to know what these are to avoid hefty bills.

When emergencies arise, or when preexisting medical conditions make traditional transportation unsafe, the safest way to get to a hospital or care facility is often via ambulance.

The good news is that Medicare will pay for ambulance services when the situation warrants it.

Medicare Part B will cover ambulance services when it’s deemed medically necessary, and when an alternate means of transportation could be hazardous to your health. For example, if you’re in shock, unresponsive, or bleeding heavily, Medicare will generally pay to transport you by ambulance. But if you’re dealing with an injured arm or leg that may be broken, that’s not reason enough to warrant an ambulance.

In extreme cases, Medicare will also pay for ambulance transportation in an airplane or helicopter if ground travel is deemed a danger to your health. This may include scenarios in which your location can’t be reached easily by ground transportation, or if obstacles like distance or traffic are likely to put your health in danger by delaying your arrival at a care facility.

You may be eligible for covered non-emergency ambulance transportation if your health requires monitoring, and travel via a standard vehicle could be hazardous given your condition. To qualify for non-emergency ambulance service, your physician must write an order stating that ambulance transportation is necessary. You must also be confined to a bed (meaning, unable to walk or sit in a wheelchair) or need medical services during your trip that are only available in an ambulance setting, such as monitoring or IV medication.

When you receive ambulance transportation for a non-emergency situation, the ambulance company must provide you with an Advance Beneficiary Notice of Noncoverage (ABN) if it believes that Medicare may not pay for your transportation. At that point, you’ll have the option to decide whether you want to be transported by ambulance or not, and you’ll be forced to acknowledge that you’re responsible for covering that cost if Medicare doesn’t end up paying. You may also be required to pay for your ambulance service upfront.

There is a pilot program underway in several states in which prior authorization is being sought for non-emergency ambulance transportation when the beneficiary needs multiple non-emergency ambulance rides. This program allows Medicare to indicate ahead of time whether additional trips will be covered, giving the beneficiary and the ambulance company an understanding of what to expect in terms of coverage.

Your costs for ambulance services

Regardless of whether your ambulance trip is considered emergency or non-emergency, you’re responsible for a portion of its cost, unless you have supplemental coverage that will pay your share. Your Part B deductible will apply (assuming you haven’t already met it for the year), and then Medicare will cover 80% of its approved amount for the ambulance transportation. You’ll be responsible for the other 20% of the cost.

What if Medicare doesn’t pay for your ambulance?

If Medicare refuses to cover your ambulance service initially, you’re not necessarily on the hook for its entire cost. If your ambulance claim is rejected, review your Medicare Summary Notice (MSN) that covers the period during which you took an ambulance ride.

Your MSN is a summary of all of the health and health-related services you received that were billed to Medicare during the preceding three-month period, and it should give an explanation as to why your ambulance trip wasn’t covered.

Review your MSN for errors that could’ve resulted in Medicare’s refusal to pay. For example, if the ambulance company you used didn’t properly document why you needed its transportation, or if it filed the wrong paperwork, you could end up denied, in which case having your claim resubmitted could resolve the issue.

If there was no error at play and Medicare won’t pay for your ambulance ride, you have the right to appeal that decision if you feel your trip should’ve been covered. Your MSN should provide instructions on how to begin the appeals process.