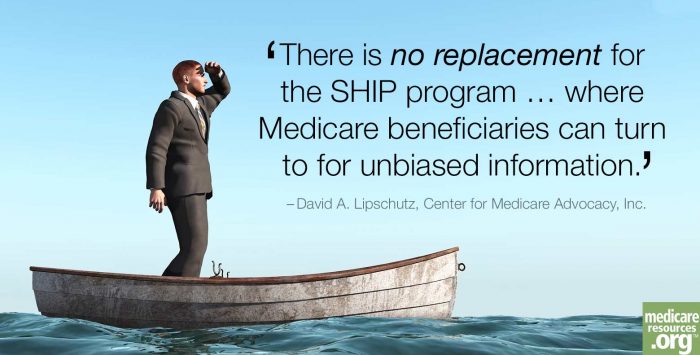 Each day, 10,000 Americans turn 65 and become eligible for Medicare. To make sense of the dizzying array of plan choices, millions rely on a nationwide federal program that provides free, unbiased insurance counseling and information about Medicare coverage.

That program is now in jeopardy of being dismantled.

Medicare State Health Insurance Assistance programs (SHIP) have been around since the early 1990s, and last year helped about 7 million Medicare beneficiaries sift through more than 20 prescription drug plans, 19 different choices of Medicare Advantage plans and various Medigap supplemental insurance policies, all of which come with different premiums, provider networks, rules around coverage and out-of-pocket costs.

“The choices are enormous for people to deal with,” says Bonnie Burns, training and policy specialist with California Health Advocates, California’s SHIP program.

A few weeks back, the Senate Appropriations Committee approved a $52.1 million budget cut – the entirety of the SHIP program budget – for Fiscal Year 2017. If the bill becomes law, SHIP programs will likely cease to exist.

“The structure of the program would be decimated,” Burns says, leaving millions of people without needed help selecting a Medicare plan.

But SHIPs provide more than insurance counseling services. Many programs handle a wide array of additional Medicare-related issues, such as helping people victimized by Medicare fraud and abuse, addressing billing problems, appeals, and enrollment in programs that provide financial assistance to Medicare recipients with low incomes.

The work is carried out by a nationwide network of more than 3,300 local programs and more than 15,000 counselors who work with people by phone and in one-on-one, in-person sessions, a service which grew by 300 percent between 2005 and 2014. In addition, last year alone, SHIPs conducted approximately 90,000 public education presentations across the U.S.

Cuts come as a surprise

The proposed cut to SHIP funding by the Senate Appropriations Committee came as a surprise to advocates.

“I was absolutely shocked by the proposal. We’ve been threatened with funding cuts before, but never to wipe [the program] out completely,” Burns says.

Efforts are now underway to educate members of Congress – and the public – about the program’s critical role, the impact its disappearance would have for millions of Americans, and to prevent the funding cut from taking place.

The Senate appropriations bill which allocates more than $93 billion in federal funds, of which SHIP funding is a tiny fraction, passed with bipartisan support.

Advocates say the vote is not a comment on the quality of the program, but rather an attempt to move money around to fund other priorities, such as plans to combat the country’s rampant abuse of opioids and growing concerns about the spread of the Zika virus and the need to develop a vaccine. The vote was also fueled by a lack of understanding about the essential role SHIP programs play in the lives of seniors, people with disabilities and their families.

“It’s our strong contention, along with other organizations, that that’s simply not the case,” Lipschutz says. “There is no replacement for the SHIP program and where Medicare beneficiaries can turn to for unbiased information.”

Alternatives include 1-800-Medicare, or an online search through Medicare’s Plan Finder tool, neither of which offer the in-depth and local assistance SHIPs often do.

Private organizations, and licensed insurance agents and brokers can also be of help in selecting the right Medicare policy that best covers a person’s medical needs. But advocates point out that most of the private organizations people tap for Medicare plan information are affiliated with insurers in some way, and licensed agents and brokers often have a financial incentive for beneficiaries to choose one plan over another. SHIPs, Lipshutz says, are the only free and unbiased counseling available.

And, there’s another detail that appropriators seem to have overlooked. According to the National Council on Aging, one-third of all referrals to SHIP programs originate from the same entities the Senate Committee cites as being able to pick up the slack if SHIPs go away – insurers offering Medicare plans, local and state agencies, the Centers for Medicare and Medicaid Services, the Social Security Administration and members of Congress and their staff.

Lost at sea without a SHIP

Burns and Lipshutz both say the sad fact is that without the SHIP programs, many people are likely to be left to fend for themselves. That’s particularly worrisome for beneficiaries with low incomes and those with cognitive and other chronic illnesses that make processing complicated information about Medicare an even greater challenge.

And, the timing of this couldn’t be worse. During last five years Baby Boomers started turning 65 to the tune of about 10,000 per day.

“That’s been true over last five years and will be the case for next 15,” Burns says.

“Current SHIP funding is $52.1 million. However, if SHIP funding had simply kept pace with inflation and the increasing number of Medicare beneficiaries since FY11, spending for the FY17 would be $66.6 million,” the NCOA wrote in an issues brief, citing that in the past 10 years, the number of beneficiaries receiving counseling from SHIPs has tripled.

We did get some good news last week, however, giving cause for optimism: A House subcommittee voted to continue the funding that several weeks ago the Senate committee voted to eliminate. A vote by the House appropriations committee will occur this week, and expectations are that spending will be approved.

The next step is a vote by both the full House of Representatives and the Senate. Given that the bill also cuts money for the Affordable Care Act, Medicare and the Social Security Administration – all actions opposed by Democrats – negotiations will be needed to reach an agreement.

So what happens to Medicare beneficiaries if funding for the SHIP programs is eliminated and the assistance is no longer available?

“A lot [of people] will go without assistance,” Lipshutz says.

It’s unclear when the final vote will take place. But Lipshutz says he expects it will probably be sometime in the fall.