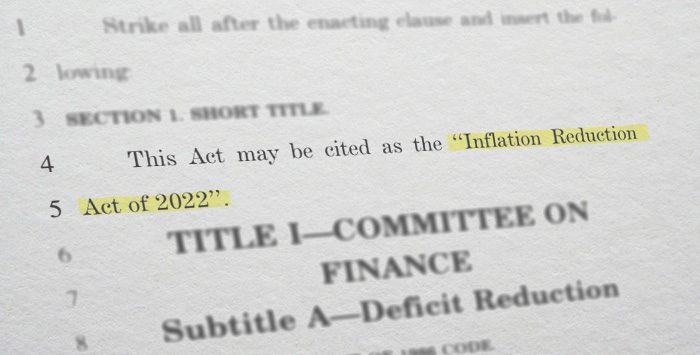 The newly enacted Inflation Reduction Act (IRA) includes some important healthcare provisions. In addition to the affordability measures for Americans who buy health insurance in the ACA marketplace, the IRA also improves pharmacy benefits for those with Medicare. These Medicare changes will phase in over the next few years.

Let’s take a look at what Medicare beneficiaries can expect from the IRA, starting in 2023:

How will the Inflation Reduction Act affect Medicare prescription drugs in 2023?

The first improvements will take effect in January 2023. At that point (and going forward):

Copays for all insulin products will be capped at $35/month for all Part D plans.

Under current rules, some Medicare beneficiaries already have this benefit for some insulin products, thanks to the Senior Savings Model (SSM), which requires participating Medicare Part D plans to offer select insulin products at $35/month or less. This opt-in program has been in use since 2021, and roughly 17 million Medicare beneficiaries are enrolled in Part D plans that participate in the SSM.

Under the IRA, the $35/month copay cap for insulin will be extended to include all Part D plans and all insulin products, including those dispensed via insulin pumps (although the $35/month copay cap takes effect in January 2023 for insulin covered by Part D, insulin covered by Part B and used with an insulin pump will have the $35/month cap as of July 2023). Note that GLP-1 receptor agonists are not insulin and are thus not subject to this rule. Note also that Part D plans will still have formularies that determine which insulin products they cover; different plans will cover different insulins.

Recommended vaccines will be free for people with Medicare Part D.

Under current rules, vaccines covered under Medicare Part B (COVID, flu, pneumonia, hepatitis B) are already free. But vaccines covered by Part D – including Tdap (tetanus, diphtheria, pertussis) and shingles vaccines – have cost-sharing that varies from one plan to another. This means Medicare beneficiaries can be paying hundreds of dollars in out-of-pocket costs in order to get the vaccines that the CDC’s Advisory Committee on Immunization Practices (ACIP) recommends.

The IRA’s new rules will bring Medicare Part D in line with individual/family and employer-sponsored health plans. With the exception of grandfathered plans, these policies have been required to cover cover ACIP-recommended vaccines without any cost-sharing for well over a decade, thanks to the Affordable Care Act (ACA). As of 2023, thanks to the IRA, people with Medicare Part D will have the same benefit.

A similar rebate system already operates in the Medicaid program, and plays a significant role in keeping drugs costs lower for Medicaid.

How will the Inflation Reduction Act impact Medicare enrollees in 2024?

These additional improvements will take effect starting in 2024:

The 5% coinsurance in the Part D catastrophic coverage level will be eliminated.

As of 2024, Part D enrollees will no longer have to pay the 5% coinsurance (or any copays) after they reach the catastrophic coverage level. For Part D drug spending, this will effectively result in an out-of-pocket cap of about $3,250 in 2024. (Although the “out-of-pocket” threshold that puts a person into the catastrophic coverage level in 2022 is $7,050, this is a combination of the amount the enrollee pays and the manufacturer’s discount.)

The cost-structure for Medicare Part D is complicated. The ACA “closed” the Part D donut hole, but enrollees’ costs still change when they hit the initial spending threshold where the donut hole used to begin. And although costs are split between the enrollee, the plan, and the manufacturer (with different splits depending on how much the person has spent that year), actual out-of-pocket costs are quite high for some enrollees. This is especially true for those whose costs push them into the catastrophic coverage level, where they currently pay 5% coinsurance without any cap on how much they spend.

Under the IRA, enrollees will no longer pay anything once they reach the catastrophic coverage level. But the amount that Part D plans and drug manufactures pay will increase, while the amount that Medicare pays will decrease.

The full Low-Income Subsidy (Extra Help) will be available to more beneficiaries.

The Low-Income Subsidy, also known as Extra Help, is a program that makes Part D coverage and prescription out-of-pocket costs affordable for enrollees with limited income and assets.

Under the IRA, as of 2024, full Extra Help eligibility will be extended to enrollees with income up to 150% of the poverty level, and assets up to $15,510 for an individual and $30,950 for a couple. (Note that these asset limits are inflation-adjusted so they will change a bit by 2024, but they are the limits that currently apply for partial Extra Help.)

Full Extra Help means these beneficiaries will pay no premiums for the Part D benchmark plan, have no Part D deductible, and will only pay low copays at the pharmacy. (As of 2022, these copays are $3.95 for generic drugs and $9.85 for brand-name drugs.)

From 2024 through 2030, the national base beneficiary premium for Part D coverage can’t increase by more than 6% per year.

For perspective, the national base beneficiary premium is $33.37/month in 2022, and will decline slightly, to $32.74/month in 2023. The base beneficiary premium is what the government uses to calculate the Part D late enrollment penalty, and it’s essentially an average premium amount for standard Part D coverage. But there is wide variation in Part D premiums from one plan to another; some are currently as low as $7/month, while others are over $100/month, depending on the plan and the location.

The IRA’s limit on how much the base beneficiary premium increases will help to prevent insurers from pushing the cost of the new coverage requirements onto beneficiaries in the form of higher premiums. But the IRA does not mean that every plan’s premium increases will be capped at 6% per year, and it will still be important for enrollees to actively compare their Part D plan options each year to make sure they enroll in the plan that best meets their needs and provides the best value.

Which IRA provisions will take effect in 2025?

One of the most highly anticipated IRA improvements will take effect in 2025. At that point, there will be a $2,000 cap on out-of-pocket costs under Medicare Part D. As noted above, the elimination of the 5% coinsurance in the catastrophic level of coverage will effectively implement a Part D out-of-pocket cap of about $3,250 in 2024. But as of 2025, Part D out-of-pocket costs will be capped at $2,000 for all enrollees. This will include the deductible and any copays or coinsurance that they pay. The legislation does state that the $2,000 cap could increase in subsequent years if Medicare’s per-enrollee drug spending increases.

Part D enrollees will also have the option to spread their costs out over the year, paying on a monthly basis. This will make it easier for beneficiaries on a fixed income to budget for their prescription costs.

Under the current structure, beneficiaries with high-cost drugs can hit the catastrophic coverage level early in the year, spending potentially thousands of dollars in a fairly short period of time. Under the new rules, even if a person is going to hit the $2,000 cap, they would have the option to split that into monthly payments of about $167, instead of paying the whole amount in the first few months of each year. This is detailed in Section 11202 of the bill.

Starting in 2026, Medicare will be able to negotiate pricing with drug manufacturers. This will apply to a fairly small subset of drugs. But they will be some of the most expensive drugs, and relatively few drugs account for the majority of Medicare’s drug spending. The first year of negotiated rates, applicable to 10 drugs, will be 2026. But the process will begin next year:

The IRA’s Medicare drug pricing provisions will benefit millions of Medicare beneficiaries. The ACA began the process of improving Part D benefit, by gradually closing the donut hole. But the IRA goes much further, and implements some very tangible benefits, particularly for those who need high-cost medications.