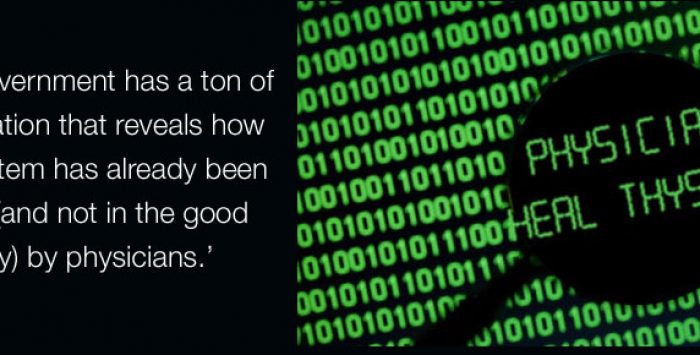 Data shows some physicians implementing their own medicare reimbursement ‘fix’

If data could talk, it would say, ‘physician, heal thyself’

When it comes to physicians and the way they’re reimbursed by Medicare, there’s plenty to debate – even among physicians. A recent survey reveals that physicians agree that the reimbursement system definitely needs to be fixed, while at the same time revealing that the physicians can’t find much consensus on how it should be fixed.
So it was interesting to read this Wall Street Journal article, which points out that apparently, the government has a ton of information that reveals how the system has already been fixed (and not in the good way) by physicians. The information’s in a database that has data on 5 percent of Medicare beneficiaries and their claims paid by Medicare.
It reveals frightening stuff – like the fact that the government loses $70 billion to $120 billion a year in Medicare and Medicare fraud. Where’s the money going? The Wall Street Journal gives us a clue, citing data for one unnamed family-practice doctor who billed more than $2 million in 2008.
The Wall Street Journal has sued to have the database opened to the general public so that media can shine a spotlight on other physicians with suspicious billing practices. If the data is ever made public, unnamed doctors would get named.
It sounds like a decent idea to us, too, but so far, the American Medical Association has stymied similar efforts to open the records, citing physicians’ right to privacy. We’d like to see that wall come down, but in the mean time, we’re just happy to see that someone’s crunching the numbers and striking fear into the hearts of physicians who need to heed the advice, “Physician, heal thyself.”
[Edit: in late 2011, the Wall Street Journal reported that HHS was making the Medicare claims database more available to the public than it had been in the past, but access was still restricted to “community groups comprising doctors, health insurers, businesses, consumers and government that work to improve health care at the local level.”  Then in 2013, a federal judge lifted the 33 year-old ban on public access to the Medicare claims database.  By 2014, media outlets were reporting on the amounts that various physicians were receiving from Medicare, and the NY Times had created a tool that readers could use to see how much their doctor received from Medicare.]