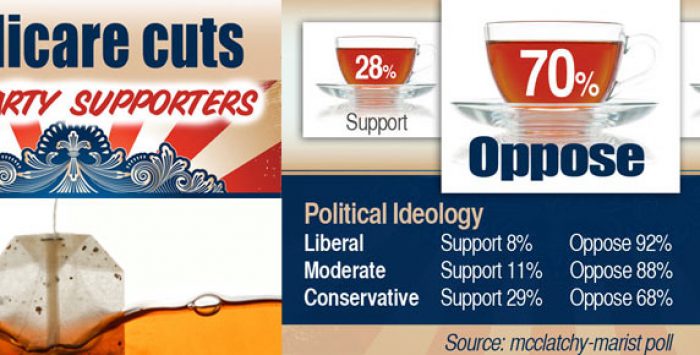 Rep. Paul Ryan (R-Wisc.)  and his House GOP brethren are throwing a party, and no one is coming – not even the usually reliable folks who prefer to party with tea.

A new McClatchy-Marist poll shows that voters of all stripes were serious last year when they cried, “Hands off my Medicare!” and that even those on far right won’t keep blindly following the conservative Pied Pipers when they decide to play this new “voucher” tune: seven out of ten people identifying themselves as part of the Tea Party movement say they oppose using cuts to Medicare and Medicaid to balance the budget.

Ryan’s plan has been rightly called “a thinly disguised assault on Medicare.” The House GOP knows they have no immediate hope of ending Medicare, but they’re telegraphing their long-term plans to cut all the cords holding up America’s social safety net. That should be a brutal wakeup call for all of us as we get a glimpse of how they would reshape America as a less kind, less gentle nation. They don’t plan to stop at Medicare; Social Security won’t be far behind.

As much as I’d like to believe that opposition to cuts in Medicare and Medicaid is a big Kumbayah moment where we all realize “we’re all in this together,” I know it’s more likely driven by our individual fears about what the Hell will happen to each of us if we get old and can no longer provide for ourselves.

Fear is what drives fringe groups. Fear of people of a different religion or ethnic background. Fear that somebody’s getting something of yours, or that you aren’t getting something that’s rightfully yours. Or in the case of the Birther Movement, the fear of a leader that’s a different color. Most often, fears have an economic root, and politicians are often shameless in exploiting those fears, especially in tough economic times.

But there is one fear that is apparently uniting us all: the fear that we’re all going to get old (knock on wood), we’re all going to get sick, and many of us will not be able to take care of ourselves physically or financially at some time near the end of our lives. That realization is what helped spark the creation of Medicare. Switching to a voucher system will cut the legs out from many seniors – that’s health care rationing of the cruelest sort.

The irony is that Medicare is guaranteed issue, government-run health care – the type of program Ryan and his ilk railed against in last year’s health reform debate. America stands alone in the world with health care twice as expensive as its peers, a much larger uninsured population and worse outcomes. We also are the odd duck out by relying chiefly on a private health insurance system. Coincidence?

We may not all be on the same page there, but the GOP in the House isn’t even in the same book when it comes to Medicare. At least we can all agree that when we are old, sick and poor, we still want our dignity and access to health care. That’s a great place to start.