Home > Blog > O’Malley is out; his Medicare plan shouldn’t be 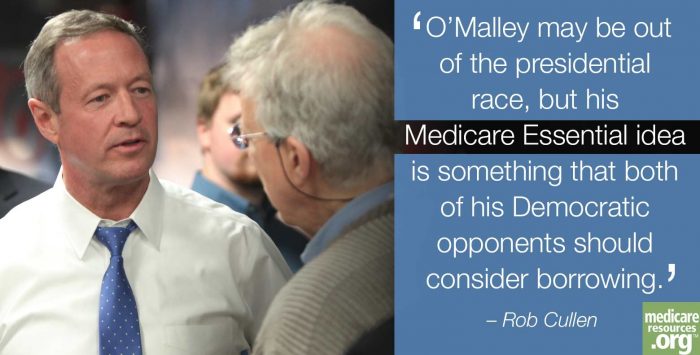 O’Malley is out; his Medicare plan shouldn’t be

The candidate struggled to get voters to buy into his vision, but his Medicare plan should be an easy sell ... even to a GOP Congress

Throughout his campaign for president, Martin O’Malley struggled just to get people to notice him. O’Malley announced that he was running back in May 2015, yet days before the Iowa caucus, 41 percent of the state’s Democratic voters said they still didn’t know enough about him to have an opinion. His support in national polls was barely enough to keep him in the debates, but once onstage he could hardly get a word in. During one debate on CNN, twice he tried to talk about his healthcare plan, and both times moderators cut to commercial instead.

Still it might not have helped. O’Malley had some really smart ideas for health reform, but even when he had a chance to talk, he wasn’t great at explaining them in a way that resonated with voters. Granted, the centerpiece of his plan – which he calls “comprehensive payment reform” – is a wonky subject that’s difficult to make interesting (although if you’re curious, I gave it a shot here). But his Medicare plan, which he rarely talked about, should have been an easy sell.

Originally proposed by researchers from John Hopkins University and the Commonwealth Fund, “Medicare Essential” could make Medicare simpler for enrollees, lower their premiums and out-of-pocket costs, and improve the quality of their care. It’s an idea that could strengthen Clinton’s “Medicare for More” plan or serve as a step toward Sanders’ “Medicare for All.” On top of that, it would cost the federal government nothing, making it hard for even a Republican Congress to vote no.

So what is Medicare Essential?

As O’Malley explained on his website, Medicare Essential is actually pretty simple: it would combine hospital, physician, prescription drug, and supplemental coverage into one opt-in Medicare plan. What he fails to really explain is why this is such a good idea.

People on Medicare report being much happier with their coverage than working-age people with private plans, so it’s easy to miss the fact that some beneficiaries can face enormous out-of-pocket costs. Thanks to the Affordable Care Act there’s an annual limit on out-of-pocket costs for private plans – $6,850 for an individual or $13,700 for family coverage – but there’s no such limit on traditional Medicare. Richard Mayhew, an insurance expert who blogs at the website Balloon Juice, recently showed how in a worst-case scenario Medicare’s daily hospital costs and coinsurance for doctors and prescription drugs could leave an enrollee on the hook for over $400,000 in a single year.

Traditional Medicare also has some hefty deductibles: $1,288 for Part A’s hospital coverage, $166 for Part B’s physician coverage, plus up to $360 for a drug plan, for a total of $1,454 to $1,814. That’s comparable to many private plans for working-age people, but could be unaffordable for seniors on limited incomes.

One reason we don’t hear more stories about seniors going bankrupt due to medical bills (although there are plenty) is that the vast majority of Medicare recipients have some kind of supplemental coverage. That could mean a Medigap plan, Medicare Advantage, retiree health benefits from a former employer, Medicaid, or some combination of any of those. 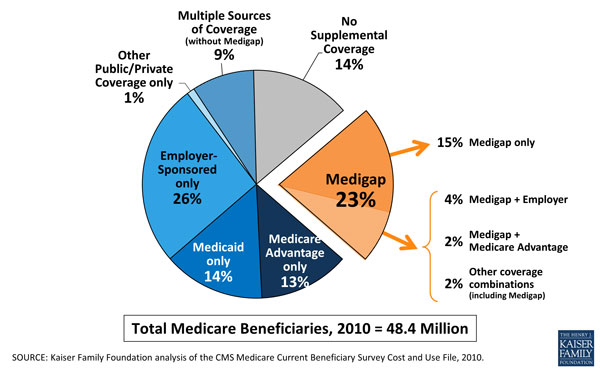 These supplemental plans are a huge help for seniors, but with so many different private payers, that help is pricier than it could be. For one, it’s inefficient. The authors of the John Hopkins/Commonwealth study point out that administrative costs for employer-based retiree plans range from 10 to 15 percent, and for Medigap plans they average around 20 percent; for traditional Medicare, administrative costs are just 2 percent.

Also, the most popular Medigap plans provide “first-dollar coverage,” meaning they kick in as soon as any medical service is used, so enrollees pay almost nothing out-of-pocket. While unaffordable deductibles and coinsurance can be a burden for Medicare enrollees, having no out-of-pocket costs means they use far more services – both necessary and unnecessary – than they otherwise would. Of course we shouldn’t discourage them from seeking necessary care, but as the Hopkins/Commonwealth researchers explain, having multiple sources of coverage “makes it difficult for Medicare to … provide incentives to seek high-value care.”

What the researchers propose then is sort of a no-brainer: eliminate the need for multiple sources of coverage by creating one plan administered by Medicare. Medicare Essential would replace the Part A, B, and D deductibles that together cost at least $1,454 with a single $250 deductible, and would set a maximum of $3,400 per year in out-of-pocket costs. If coverage that combines multiple Medicare benefits into one plan with limited out-of-pocket costs reminds you of something, you’re not wrong: in many ways, it’s basically a public option for Medicare Advantage.

The researchers estimate that this new plan would reduce national health spending by $180 billion over ten years. Private employers would save $90 billion on retiree plans by buying into Medicare Essential instead, thanks to its reduced administrative costs; state and local governments would save $27 billion.

However, recently more and more employers have been eliminating health coverage for retirees. The Kaiser Family Foundation found that the share of large employers (those with 200+ employees) offering retiree health coverage dropped from 66 percent in 1988 to just 23 percent in 2015. Five national surveys produced different estimates of the decline among all Medicare beneficiaries, but as the Kaiser report puts it, “Any way you slice it, this coverage is eroding.”

In response, many seniors have turned to Medigap plans, and a Medicare Essential would save them money as well. The typical Medicare beneficiary with a Medicare Part D drug plan and a Medigap supplemental plan spends $427 per month on premiums and out-of-pocket costs. Beneficiaries with Medicare Essential would spend $354 per month on average – a 17 percent savings. And that’s just the start. The plan also provides incentives for beneficiaries to seek care from preferred providers, like patient-centered medical homes, which reduce costs by coordinating services, a particular help to patients with multiple chronic conditions. Beneficiaries who opt for these “high-value providers” would spend even less: just $254 per month on average, a savings of 40 percent. Added up, the savings to households receiving Medicare benefits would total $63 billion over the next decade.

Other politicians should look into it

O’Malley may be out of the presidential race, but his Medicare Essential idea is something that both of his Democratic opponents should consider borrowing.

Hillary Clinton hasn’t released many details about her proposal to allow people “55 or 50 and up” to buy into Medicare, but if it’s traditional Medicare coverage, they’d be looking at those same enormous out-of-pocket costs in the event of serious illness. Medicare Essential could provide a much more attractive buy-in option without the need to purchase a separate supplemental plan.

Meanwhile, Sanders calls his plan “Medicare for All,” but it would eliminate all of traditional Medicare’s cost-sharing, which is one reason analysts say it would cost much more than Sanders estimates. A Medicare Essential benefit structure – with its modest cost-sharing and incentives to seek high-value care that both reduces costs and improves health – would bring down spending in his plan, making it easier to pay for. Also, if he couldn’t get his single-payer plan through a Democratic Congress all at once, better benefits for seniors combined with a buy-in option for younger Americans might be a more doable first step.

Medicare Essential moves in the other direction from Republicans’ recent proposals to replace traditional Medicare with vouchers for private coverage, but that doesn’t necessarily mean it would be dead on arrival in a Republican-controlled Congress. It would be hard for moderate Republicans to explain why they oppose a bill that saves businesses and seniors $180 billion, yet doesn’t cost the federal government anything. (The plan is designed to be budget neutral over its first ten years, but beyond that it could actually save the federal government money as health spending slowed).

Martin O’Malley has an idea that saves American businesses and households billions, improves health, and doesn’t cost taxpayers a dime – and despite our current hyper-partisan politics, it actually could stand a chance of passing. It’s about time that we noticed.

[…] consider borrowing, says Rob Cullen, in his first post for the medicareresources.org blog, O’Malley is out; his Medicare plan shouldn’t be. And if Clinton or Sanders does take it on, Cullen notes, the plan actually might not be doomed in […]

[…] really super piece about the Medicare Essentials plan proposed by Martin O’Malley – from the newest face over at medicareresources.org […]