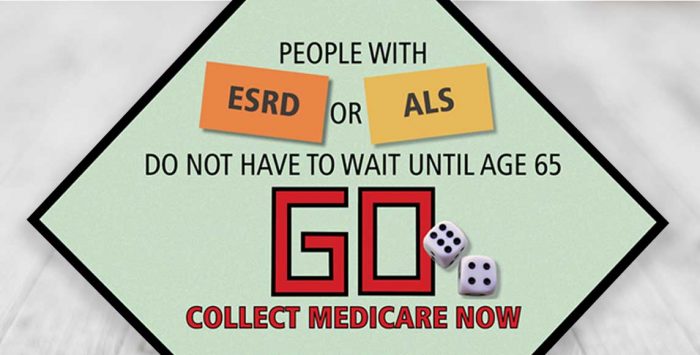 Individuals under age 65 with disabilities other than ALS or ESRD must have received Social Security Disability benefits for 24 months before gaining eligibility for Medicare. A five-month waiting period is required after a beneficiary is determined to be disabled before a beneficiary begins to collect Social Security Disability benefits, although this no longer applies for ALS.

People with ESRD and ALS, in contrast to persons with other causes of disability, do not have to collect benefits for 24 months in order to be eligible for Medicare. The same Medicare benefits apply for individuals with ESRD and ALS as they do for all other beneficiaries.

With these benefits, if you have been diagnosed with ALS or ESRD you gain the safety and benefit of essential health care coverage through Medicare, assuming you or your spouse have a work history that makes you eligible for Medicare (or, if the patient is a child, Medicare eligibility is based on a parent’s work history). The requirements for Medicare eligibility for people with ESRD and ALS are:

Special consideration has been given to patients diagnosed with end-stage renal disease. You will become eligible for Medicare on the first day of your fourth month of dialysis treatment. However, if you begin a self-dialysis training program you can become Medicare-eligible immediately. Importantly, if you decide to stop the self-dialysis program and start going to a dialysis center instead, your benefits will stop, and you will have to wait until you complete the four months of dialysis treatment to receive benefits again.

Patients receiving a kidney transplant may also be qualified for Medicare coverage as soon as they become hospitalized for the transplant.

In 1972 the United States Congress passed legislation authorizing eligibility for persons diagnosed with ESRD under Medicare. The extension of coverage provided Medicare for patients with stage five chronic kidney disease (CKD), as long as they qualified under Medicare’s work history requirements.  The ESRD Medicare program took effect on July 1, 1973, and was the first time that Medicare had extended benefits to people under age 65.

For ESRD patients who have an employer-sponsored health insurance policy in place in addition to Medicare, the private insurance will be the primary payer for the first 30 months, after which Medicare will become primary.

Legislation was introduced in 2019 to extend Medicare coverage for immunosuppressant drugs following a kidney transplant. That legislation ended up being incorporated into the third COVID relief package, signed into law in December 2020. This provision has been heralded by patient advocates who note that many people end up rationing or ceasing their immunosuppressants once the 36 months of Medicare coverage ends. This almost always leads to rejection of the transplanted kidney, and sends the patient back to dialysis and the transplant waiting list (and Medicare coverage). Not only does this lead to a reduced quality of life for the patient, but it’s also much more costly for Medicare to pay for dialysis than it is to pay for immunosuppressants.

People who enroll in Original Medicare have the option to purchase a Medicare Part D plan to cover prescription drugs. These plans are guaranteed-issue when you first enroll in Medicare, and there’s an annual election period (October 15 to December 7) during which you can switch to a different Part D plan, regardless of your medical history. But the other form of supplemental coverage, Medigap, isn’t always available to people who are under 65 and enrolling Medicare as a result of a disability, including ESRD.

There are 33 states that require Medigap plans to be guaranteed-issue for patients when they first become eligible for Medicare prior to the age of 65. But some of those states specifically clarify that plans do not have to be offered to patients with ESRD, or can be offered to them with higher premiums.

In most of the states that do require Medigap insurers to make plans available to ESRD patients under age 65, the premiums are typically higher than they would be if the applicant was enrolling in Medicare due to turning 65. In the states that don’t have specific regulations for Medigap insurers, an insurer can reject an application from an under-65 enrollee who has become eligible for Medicare as a result of ESRD. This can result in significant out-of-pocket expenses for ESRD patients, who have to pay 20% of the Medicare-approved charge for each dialysis session if they don’t have supplemental coverage that picks up the extra cost (there’s no cap on out-of-pocket costs for Original Medicare).

The new provision allowing ESRD patients to enroll in Medicare Advantage plans can be helpful in these situations, as long as the person’s hospital, doctors, and dialysis clinic are all covered under the plan’s network.

Medicare has a 60-page booklet all about Medicare coverage of dialysis and kidney transplants.

As with ESDR, if your disability is amyotrophic lateral sclerosis (ALS, or Lou Gehrig’s disease), you don’t have to wait 24 months for Medicare coverage. You can get Medicare as soon as you become entitled to SSDI. And although there used to be a five-month waiting period after applying for disability benefits before they are awarded, that’s no longer the case. Legislation was enacted in late 2020 that ended the waiting period, allowing ALS patients to get SSDI and Medicare immediately after diagnosis.

Enrollees with ALS can select a Medicare Part D plan when they become eligible for Medicare, which will help with the cost of prescription drugs. But as is the case with ESRD, people who are under 65 and enrolled in Medicare due to ALS might not have access to a Medigap plan, depending on where they live. There are 33 states that have at least some sort of guaranteed issue requirements for Medigap when a disabled Medicare beneficiary is under age 65, although insurers may still be able to charge higher premiums for enrollees under the age of 65 (in most of the remaining states, there is either a high-risk pool option for Medicare beneficiaries under age 65, or at least some insurers voluntarily offer Medigap plans to people under 65).

In 2014, The ALS community reacted strongly to a CMS announcement that some medical devices used by ALS patients would no longer be covered by Medicare.  Medicare does cover basic speech generation devices, but since 2001, patients have been able to pay the additional cost to get “upgradable devices” that can be used to perform additional tasks like opening doors, switching on lights, and connecting to the internet.  As technology has advanced, so has the use of these devices.

In good news for ALS patients, CMS announced in November 2014 that they had decided to hold off on enforcing the rule regarding upgradable devices, so ALS patients could still get Medicare funding for the basic cost of such devices, as long as they paid for any upgrades themselves. There was an ongoing concern, however, that CMS could implement the new rules at a later date.

But the Steve Gleason Act of 2015 provided Medicare funding for communication devices through 2018. And in 2018, the Steve Gleason Act was approved as part of a budget bill, providing permanent Medicare funding of communication devices — including eye-tracking technology and speech generating devices — and the required accessories.

SSA has an expedited procedure for processing terminal illness cases to ensure that a favorable decision can be made expeditiously. The term for this type of case is “TERI” case. A person with ALS, particularly if advanced symptoms are present, will want to advise SSA, at the time of application, that TERI case procedures are appropriate.