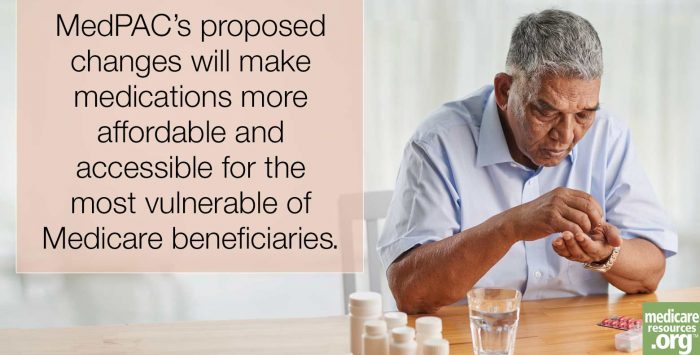 Forty-two million Americans rely on the Medicare Part D prescription drug benefit for protection against the often staggering costs of prescription drugs. Recently, a panel of Medicare experts told Congress that Part D could work better for some consumers – and the panel has recommended big changes.

Some of those impacted – poorer and very ill Medicare members – could benefit tremendously from changes that limit or altogether eliminate out-of-pocket costs in certain circumstances. And part of the Affordable Care Act may lead some of these changes to be adopted as soon as January 2019.

The recommendations by the Medicare Payment Advisory Commission – or MedPAC, as it’s known in Washington, D.C. circles – would change the prescription drug benefit in a few important ways consumers should be aware of:

First, the panel has proposed improving Part D by creating an annual limit on how much enrollees must pay toward their care.

Most types of insurance – including employer plans, Medicaid, and ACA marketplace coverage – are required by law to eliminate co-pays for members after they reach a catastrophic limit. In 2016, that limit is $6,850 for employer and individual coverage. But Medicare Part D members with serious conditions don’t have the benefit of a catastrophic limit. Even after they exit the feared Medicare donut hole, they must continue paying 5 percent of the cost of their medications indefinitely.

For my former Medicare clients who had serious and potentially life-threatening conditions like leukemia or prostate cancer, eliminating the indefinite co-pay surcharges ensures access to needed treatments – which at 5 percent co-insurance can equal thousands of dollars per month, placing life-prolonging chemotherapy and other anti-cancer treatments out of reach for many.

On balance, to pay for this change, the proposal would make it harder for more Medicare Part D enrollees to reach their annual catastrophic cap between now and when the donut hole closes in 2020. But in practice, few would be seriously impacted because it would only impact people in their Part D donut hole.

If the proposal takes effect in 2019, and the donut hole closes in 2020, then there’s only a single year with limited impact. As a result, the concerns about some having a harder time reaching their catastrophic limit are overstated and don’t apply to low-income people, and shouldn’t delay these Part D improvements.

Another major proposed change would encourage use of generic drugs among poorer enrollees, by altogether eliminating their costs for generic drugs.

Most low-income Part D members pay little or nothing for Part D prescription drugs. (This year, costs range from $1.20 and $2.95 for generics, and from $3.60 and $7.40 for brands). Health plans can’t “tier” medications for the majority of these Part D members like they do in other types of health plans in the commercial or ACA markets (thereby steering members toward treatment options that have more bang for their buck).  By eliminating copays for generic drugs – and some preferred brand drugs – Medicare plans can ensure enrollees spend federal dollars wisely while accessing cost-effective care.

Many lower-income Medicare members – for whom a mere $2.95 copayment can be a financial burden – would benefit by paying nothing for their generics and cost-effective brands, thus increasing medication adherence. That said, a small number of low-income members who chose to continue using non-preferred brand medications would have to pay more – by up to two times – for those less cost-effective treatments.

In my opinion, sufficient protections are in place for these members because there will be an already established exception process in the event a less expensive medication isn’t clinically appropriate for a Part D member.  Lower federal spending and greater financial responsibility for Part D plans would help pay for eliminating those generic copays.

A third proposal would change the types of medications Part D plans are required to cover.

Currently, most Part D plans must cover most or all medications in several important groups of medical treatments, including anti-depressants and anti-rejection drugs. The proposed Part D changes would mean that plans could select – based on cost-effectiveness and manufacturer willingness to negotiate rebates – which of these medications end up on the Part D plan’s formularies.

Policy experts generally acknowledge that this so-called “protected classes” provision isn’t necessary for at least these two groups of drugs Medicare beneficiaries access through Part D, compared to the market when the program was implemented in 2006. In fact, the mandate to cover virtually all of certain medication types led some Part D plans to pay far more by killing all negotiating that plans typically have to secure rebates from manufacturers in turn for a promise of a percentage of the member market share.

Medicare beneficiaries should be less concerned about restricted access to anti-depressants and rejection drugs. When CMS tried to make this change last time – in 2014 – the proposal was met with fierce opposition from some Democrats and most advocacy organizations, leading to its demise.

Other changes suggested by MedPAC include reducing how much the federal government subsidizes plans with expensive members. Also, the panel proposed modifying or combining out-of-pocket costs in Parts A and B of Medicare, both now perennial suggestions in Medicare policy circles.

When changes would happen – if implemented

Part D enrollees shouldn’t expect changes until at least 2019 – and if MedPAC’s proposals are adopted, it’s likely changes would be limited to net improvements for members such as the out-of-pocket cap and lower-cost generics (as well as a hike in co-pays for expensive brands, which admittedly will be problematic to some of the most vulnerable members).

Although some enrollees would lose under the proposal, many would benefit. Paying $0 for critical maintenance medications can go a long way for the poorest of individuals. (Low-income Medicare beneficiaries have long used far more brand medications than their middle- or higher-income counterparts – and this wouldn’t be the case if plans had the ability to steer members toward generics and less costly brand drugs.)

Saving taxpayers’ money while increasing access to generics would be a net benefit to members. In turn, Congress (and federal taxpayers) would see less money go toward the Part D plans, which are heavily subsidized and growing more costly each year.

The MedPAC changes are likely to be taken seriously by policy makers, especially since the changes have been proposed previously. And today, more than ever, they hold significance because the ACA’s Independent Payment Advisory Board (IPAB) – a controversial Medicare cost-control panel – must, by law, recommend cuts to Medicare spending as soon as 2019.

To date, IPAB has come under fire from Republicans and some Democrats, leading President Obama to avoid appointing any of the required members to the panel. This means that instead of IPAB, the next President and his HHS department will likely recommend how to limit Medicare spending, and their recommendations – under the ACA – will be fast tracked by Congress and could take effect without modification if current political gridlock continues.

With HHS and the President addressing the 2019 Medicare cost cuts, past experience will inform their future actions. When HHS first tried some of these Part D changes in 2014, the fierce resistance by members of the President’s own political party caught HHS by surprise. Any future proposal will need to be toned down. Reduced or eliminating copays for generics and a true out-of-pocket limit to Part D co-pays that truly protects members are politically palatable and a majority of Medicare beneficiaries should be eager to see them take effect.

Overall these changes highlighted – along with several others to be highlighted in future articles – will increase affordability and accessibility of needed medications for the most vulnerable of Medicare beneficiaries: the very poor, and the very sick. Since the Part D program is 10 years old now, it is about time for a few changes like these – having been debated and sidelined for years.