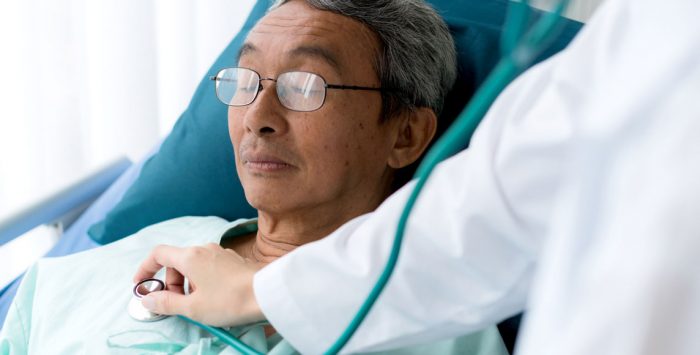 For Medicare beneficiaries who aren't actually admitted to a hospital – and are classified as "under observation" – costs could change significantly. | Image: whyframeshot / stock.adobe.com

Q. How will my hospital costs be affected by inpatient or observation status?

A: Your costs could change significantly – and not for the better – if you enter a hospital for observation only.

What's the difference if I'm assigned observation status at a hospital instead of inpatient?

Under Medicare Part A, you’re entitled to up to 60 days of hospital care at no cost to you after meeting a $1,484 deductible – provided you stay for three days in the hospital while admitted as an inpatient. But not everyone who enters the hospital gets admitted – or they might not be admitted for a long enough portion of their stay to qualify. If you’re assigned observation status, Part A won’t pick up the tab for your care. Rather, your claim will be paid under Medicare Part B, which covers outpatient care – even if you actually stay overnight in a hospital or you receive extensive treatment that made it seem like you were an inpatient.

The result? You may be liable for coinsurance equal to 20 percent of the cost of your stay. And while your Medigap plan would pick up some or all that cost, you may not have supplemental insurance in the first place. (All Medigap plans will pay the Part B coinsurance, although Plans K and L only cover 50 and 75 percent of it, respectively, and Plan N has a $20 co-pay.)

Of course, inpatient care under Medicare Part A isn’t free, either. This year, you’ll be subject to the standard $1,484 deductible as part of being admitted. But once that’s done with, your first 60 days in the hospital cost you nothing. A two-day hospital stay under Part B, on the other hand, could cost you more than this, depending on the tests run and services performed during that time.

(If you are admitted as an inpatient and Part A covers your hospital stay, Medicare Part B will still pay for any physician services you receive, which means you’ll owe some Part B co-insurance for any stay. But if you are admitted as an inpatient, you’d likely pay less overall in Part A deductible and Part B coinsurance costs than if you were are classified as an observation patient your entire stay is covered by Part B. And the difference in your costs could be especially significant if you don’t have supplemental insurance.)

Could I end up with a huge bill for hospital care – even if I have Medicare?

Here’s how you could wind up with a huge bill for hospital care under Medicare: You arrive at a hospital emergency room complaining of chest or abdominal pain. You’re assessed initially and deemed well enough to not warrant inpatient care, but also not well enough to go home. As such, you’re put on outpatient observation status, where you’re monitored for a given period of time (often, 24 hours at a minimum) before you’re sent on your way. (Although you may find yourself classified under observation status for a number of reasons – not just if you’re “slightly too ill to return home.”)

Scenarios like these unfold all the time, but they can be catastrophically costly for seniors. And the worst part? Many Medicare enrollees aren’t even aware that it’s happening.

Does Medicare encourage hospitals to classify patients as under observation – and how does this impact me?

The Department of Health and Human Services Office of Inspector General (OIG) found that Medicare was reimbursing hospitals significantly less for short observation visits, with average payments in 2012 of $1,741, compared to what it paid for brief inpatient visits, which averaged $5,142. This shows the financial incentive Medicare to encourage hospitals to classify patients under observation from a financial perspective. Medicare sets the admissions criteria under which hospitals are allowed to make an inpatient admission under Part A, and Medicare auditors commonly deny hospital inpatient claims on the grounds that a patient’s medical condition didn’t require them to be admitted.

This has caused hospitals to increasingly err on the side of classifying patients under observation status, where claims are less likely to be questioned. If this happens to you, it means you could have large Part B coinsurance costs and would be ineligible for Medicare SNF coverage.

Due to concerns about the consequences for beneficiaries classified under observation status, Congress passed the Notice of Observation Treatment and Implication for Care Eligibility Act (NOTICE Act) in 2016. The legislation required hospitals to notify patients if they are classified under observation for more than 24 hours. But HHS interpreted the law as applying only to certain patients, which means there is a chance you won’t be notified depending on your specific status. The NOTICE Act also did not create any appeals rights for Medicare beneficiaries to request that their status be changed – although you can still advocate for this informally.

The bipartisan Improving Access to Medicare Coverage Act of 2019 (S. 753/H.R. 1682) would require Medicare to count the entire time spent in the hospital toward satisfying Medicare’s “three-midnights rule” regardless of a beneficiary’s classification as observation or inpatient, which would mean you could qualify for Medicare SNF coverage after spending three midnights as an observation outpatient (or after a combination of time as an outpatient and inpatient). The Center for Medicare Advocacy has also proposed requiring only a one-night inpatient stay before Medicare will cover SNF care – or eliminating the inpatient stay requirement altogether.

A number of states, including New York and Connecticut, have enacted their own legislation to address challenges with observation status.

Can I appeal my classification as an observation patient?

A federal court ruled on March 24, 2020 that beneficiary can appeal classification under observation status and request Medicare to pay for subsequently denied SNF care going back to 2009. The judge’s ruling applies to you if you were treated for at least three days, and a portion of that was classified as an observation stay – although you can appeal regardless of stay length if you only had Part A or if more than 30 days passed between the hospital visit and admission to a SNF.

Will Medicare pay for skilled nursing facility (SNF) care if I was an observation patient?

Higher out-of-pocket costs for hospital care aren’t the only danger associated with observation status. Sometimes, patients who receive such care wind up needing skilled nursing facility care after the fact. The problem? Medicare won’t cover it.

Medicare will pay for up to 20 days of skilled nursing facility care during which your out-of-pocket cost is $0. (Beyond that point, you pay $185.50 per day for days 21 through 100.) But to qualify, you must be admitted to the hospital on an inpatient basis for three consecutive days, not including your discharge day. If you stay in the hospital under observation status, you’ll be on your own to pay for whatever skilled nursing you need. This applies even if, say, you spend a day in the hospital under observation status, you’re admitted on an inpatient basis for two days, and you’re subsequently discharged.

Here’s what that means for you in terms of cost: Say you wind up at a skilled nursing facility for 30 days following a hospital visit that doesn’t render you eligible to have that nursing care covered by Medicare. The average cost for a month-long stay with a shared room in a nursing facility is $8,821 per month or $290 per day – which is a lot higher than the $0 you’d pay if Medicare covered the full cost.

The takeaway? Before you sign any hospital paperwork, know what status you’re entering under, and advocate for observation status to be changed if you feel that’s not appropriate given the nature of your visit. It also pays to read up on Medicare’s rules for inpatient versus outpatient care so you know what rights you have as a patient.

Maurie Backman has been writing professionally for well over a decade, and her coverage area runs the gamut from healthcare to personal finance to career advice. Much of her writing these days revolves around retirement and its various components and challenges, including healthcare, Medicare, Social Security, and money management.