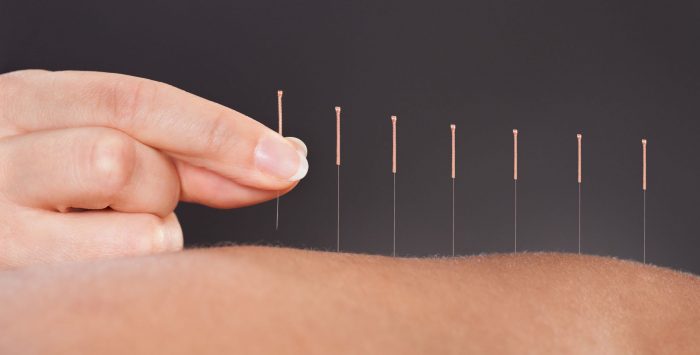 In January, the Centers for Medicare & Medicaid Services (CMS) announced that for the first time, Medicare will cover acupuncture for treatment of chronic lower back pain. | Image: Shutterstock

Acupuncture for chronic back pain now covered by Medicare

In January, the Centers for Medicare & Medicaid Services (CMS) announced that for the first time, Medicare will cover acupuncture for treatment of chronic lower back pain. The needle-based treatment is part of a growing field of holistic and alternative treatments to carve out space in the American healthcare system. The move to cover acupuncture is part of an ongoing effort by Medicare to offer non-narcotic and opioid-free treatment options for those in chronic pain. Covered services will include up to 12 acupuncture sessions in 90 days, with an additional eight sessions for patients who are demonstrating improvement. Coverage will be capped at 20 treatments annually.

According to a new report by Health Affairs, dental, vision, and hearing expenses for Medicare beneficiaries continue to be paid mostly out-of-pocket, with enrollees paying 70% of their dental costs, 62% of their vision costs, and 79% of their hearing care costs. The report found that access and usage depend in large part on the enrollee’s income and whether they’re enrolled in Original Medicare or a Medicare Advantage plan.

These benefits can also be provided via employer-sponsored plans (for current employees or retirees), and stand-alone coverage can be purchased for dental and vision costs (but generally not for hearing aids and associated services). But the Health Affairs analysis found that only 21 percent of Original Medicare beneficiaries had obtained stand-alone dental coverage, whereas 62 percent of Medicare Advantage enrollees were in Advantage plans that included dental benefits.

Medicare Advantage is clearly an important source of dental, vision, and hearing benefits for a significant number of Medicare beneficiaries (although the benefits tend to be fairly limited, with caps around $1,000 per year). Adding dental, vision, and hearing benefits to Original Medicare has long been a priority for some members of Congress. But for the time being, roughly two-thirds of all Medicare beneficiaries (including those in Original Medicare as well as Medicare Advantage) have no dental coverage at all.

CMS has proposed several 2021 initiatives to lower prescription drug costs. One initiative would recognize Part D plans that use the most generics or biosimilar versions with higher star ratings, and reward those plans in yet to be decided incentives. In 2017, generic dispensing and generic substitution accounted for 81% and 91% of all filled prescriptions, but the remaining drugs accounted for a disproportionate share of Medicare drug costs and patient out-of-pocket expenses.

Another proposed initiative would ask Part D insurers to create a second tier for the most expensive drugs, and through negotiations with manufacturers reduce costs for favorable placement in that “preferred” tier. Any increase in generic utilization, particularly for the highest cost top-tier drugs, would rely on a more streamlined and revised system for moving costly drug therapies into the generic phase as quickly as possible.

A recent agreement between Partners in Primary Care (a subsidiary of Humana that operates a chain of senior-focused primary care centers) and private equity firm Welsh, Carson, Anderson & Stowe, aims to increase access to primary care services for all Medicare Advantage enrollees, including those who don’t have coverage through Humana.

Humana is the nation’s second-largest Medicare Advantage insurer, and sees primary care access as essential to growing its enrollee base, as well as keeping overall costs in check. Access to primary care has been shown to be pivotal in early identification of diseases and expensive chronic conditions, improving the health of patients (and the bottom line of insurers). Partners in Primary Care currently operates 47 primary care centers in six states, and that’s expected to double under the agreement with WCAS.

The move follows UnitedHealthcare’s 2019 announcement that it would open 14 Medicare service centers in Walgreens across the country.  The UnitedHealthCare Medicare Services centers were slated to open in January 2020, and offer enrollees on-site annual wellness visits, tests, and other preventive treatment offerings.  CVS Health (owner of insurer Aetna) plans to launch 1,500 HealthHUB stores nested within CVS locations by 2021.  Plans for the HealthHUBs include consumer access to preventive primary care, chronic disease management, and wellness programs.  Access to primary care has been shown to be pivotal in early identification of diseases and expensive chronic conditions.

For Medicare beneficiaries who receive Home Health Agency (HHA) services, 2020 will bring the biggest changes since 2000 to how these agencies receive payment from Medicare. The new CMS rules aim to better allocate Medicare resources, but some patients and providers have raised alarms that beneficiaries stand to lose current or additional therapy visits due to new patient classifications and “suggested” lengths of treatment, and that some HHAs are cutting therapists on staff. The new methodology for CMS patient grouping could particularly impact those with long-term chronic home health needs by disincentivizing HHAs from providing additional visits beyond the reimbursement limits. Those who depend, or will depend, on Medicare covered home care services are advised to speak with their HHA on how they are adapting to the new PDGM metrics, and the best options to ensure their loved ones continue to receive care.

ESRD beneficiaries can enroll in Medicare Advantage in 2021

Patients diagnosed with end-stage renal disease (ESRD) will be able to enroll for coverage in all Medicare Advantage plans starting in 2021; previously such individuals could only participate in most MA plans if they enrolled before developing ESRD. The proposed rule by CMS to expand the option of Advantage enrollment is part of the 21st Century Cures Act, and is aimed at making coverage for ESRD more affordable while incorporating MA supplemental benefits such as transportation and meal delivery services. ESRD entitles most Americans to Medicare benefits. However until now, people with ESRD could typically only have Original Medicare and had trouble accessing supplemental coverage to limit their out-of-pocket costs.

According to research released by UnitedHealth Group (which currently enrolls 26% of all Medicare Advantage beneficiaries in the United States), total premiums and out-of-pocket medical costs for a 72-year-old enrollee in average health were almost 40 percent lower under Medicare Advantage plans than they were with Original Medicare plus a Part D plan plus a Medigap Plan F.

Medigap Plan F is the most comprehensive Medigap plan, and it essentially reduces a beneficiary’s out-of-pocket costs to $0. (That doesn’t include prescription costs, which are covered under Part D, with out-of-pocket costs that vary depending on the plan and the person’s drug needs.) And with Original Medicare plus a Medigap plan, beneficiaries have access to most doctors and hospitals nationwide, as opposed to being limited to a Medicare Advantage plan’s provider network. But Medigap Plan F is expensive. The tradeoff for not having to worry about out-of-pocket costs or provider networks is a higher monthly premium, and that’s the primary factor in the higher total costs reflected in United’s report.

The report touts the supplemental benefits, out-of-pocket spending caps, and various care management programs that are incorporated in Medicare Advantage plans, and projected that enrollees can save up to $85,000 over a lifetime by enrolling in Advantage plans instead of Original Medicare plus Medigap coverage. But the report failed to mention the concerns by patient advocates over transparency, and the fact that if and when a beneficiary decides that they need the lower-out-of-pocket costs and broader provider access granted by Original Medicare plus Medigap, they may not be able to enroll in Medigap at all.