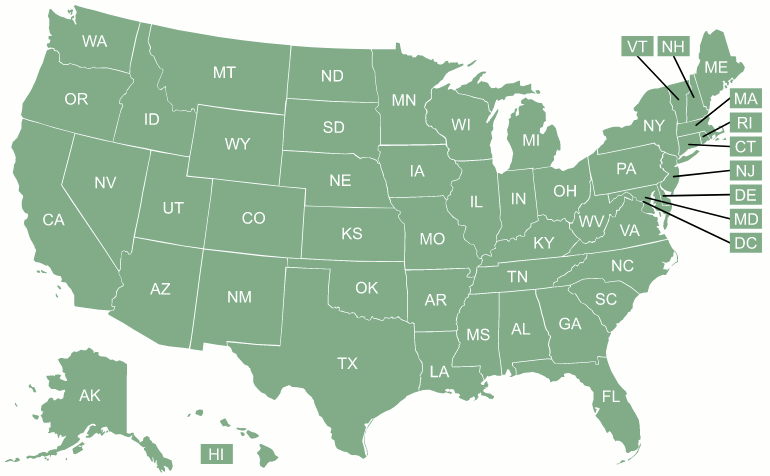 State resource pages are on our flagship site, healthinsurance.org.

Use the back button to return.

Medicare is a federal program, covering more than 61 million seniors and disabled Americans throughout the country. Medicare beneficiaries in most areas have the option to get their coverage via private Medicare Advantage plans, and a little more than a third do so.

$148-$200
39.3%
$0-$147
24.7%
$301 or more
24%
$201-$300
12%
See more Medicare Survey results
The other two-thirds have Original Medicare, but 81 percent of those enrollees supplement their coverage with employer-sponsored coverage, Medigap, or Medicaid. And more than 25 million Medicare beneficiaries also purchase stand-alone Medicare Part D Prescription drug coverage, since Original Medicare (and some Medicare Advantage plans) does not cover outpatient drug costs.

There is significant variation from one state to another in terms of availability, pricing, and regulation of private Medicare plans, and Medicare beneficiaries in different areas often make different choices about their coverage.

Medicare uses a star rating system for Medicare Advantage and Part D plans, and the availability of high-quality plans is not the same in every state.

Part D prescription drug plan availability differs from state to state as well, with the number of plans for sale in 2019 varying from 22 to 30, depending on the region. In addition, some states have only two premium-free (“benchmark”) prescription plans for low-income enrollees, while other states have as many as 10.

How and when can you change your Medicare coverage

Medigap is the only form of private coverage for Medicare beneficiaries that has no federally mandated annual open enrollment period. Medigap coverage is guaranteed issue for six months, starting when you’re at least 65 and enrolled in Medicare Part B. During that time, enrollees can select any Medigap plan available in their area, with no medical underwriting.

But once that window closes, enrollees often find themselves locked into the plan they have – regardless of how the premium changes – because in most states, switching to another plan can be impossible or prohibitively expensive due to medical underwriting. (Under federal guidelines, there are seven limited circumstances when you can get a new Medigap plan without medical underwriting.)

And although 15 percent of Medicare beneficiaries are under 65 and eligible for Medicare due to a disability (including ALS and kidney failure), federal rules do not guarantee access to Medigap plans for enrollees who are under age 65. The majority of the states have implemented regulations to ensure access to at least some Medigap plans for people in this situation, although it varies considerably from one state to another.

Some states have implemented legislation that makes it easier for seniors to switch from one Medigap plan to another, and for people under age 65 to enroll in Medigap plans.

In New York and Connecticut, Medigap plans are guaranteed-issue year-round.

Massachusetts has a two-month window each year (February through March) during which Medigap plans are guaranteed-issue.

California and Oregon both have “birthday rules” that allow Medigap enrollees a 30-day window following their birthday each year when they can switch, without medical underwriting, to another Medigap plan with the same or lesser benefits.

In Maine, Medigap enrollees can switch to a different Medigap plan with the same or lesser benefits at any time during the year, and all carriers must designate one month each year when Medigap Plan A is available on a guaranteed issue basis to all enrollees.

Missouri has an Anniversary Guaranteed Issue Period; anyone with a Medigap plan has a 60-day window around their plan anniversary each year during which they can switch to the same plan from any other carrier, guaranteed issue.

For people who are under 65 and eligible for Medicare due to a disability, Medigap availability depends entirely on state regulations, as there is no federal regulation requiring a guaranteed issue Medigap enrollment period for under-65 enrollees. The majority of the states have established regulations regarding access to Medigap coverage for this population, although they vary considerably in scope. (Click on a state on the map above to see how access to Medigap is handled in the state.)

Nationally, 25 percent of Original Medicare beneficiaries are enrolled in a Medigap supplement, but it ranges from a low of 3 percent in Hawaii to 51 percent in North Dakota.

Medigap plans are standardized, which means that a Plan F in Vermont provides the same benefits as a Plan F in Florida. But in 2010, average premiums for plan F (the most popular choice among Medigap enrollees) ranged from $139/month in Hawaii to $226/month in New York. A Business Insider analysis of average 2016 Medigap Plan F premiums for 65-year-old enrollees found a variation from $109/month in Hawaii to $162/month in Massachusetts. [Note that Plan F and Plan C will no longer be available for purchase by people who become newly-eligible for Medicare on or after January 1, 2020.]

But as of 2013, a similar analysis determined that four states (Arizona, Florida, Georgia, and Idaho) required issue-age rating (carriers would also have the option to use community rating instead), and the remaining 38 states allowed premiums to be set on an attained-age basis, which means premiums rise as an enrollee gets older (carriers in those states can use issue-age or community rating instead, but most do not).

We have details on this data and more in our state-specific Medicare pages. So check them out (here or here) if you’re curious about Medicare regulations and private plan options in your state.